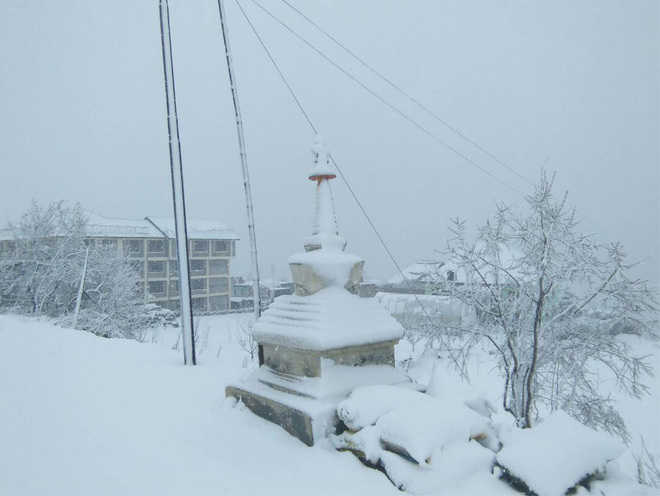 Shimla May, 1: Respite proved short-lived for the residents of tribal district Lahaul Spiti, who were cheerful after BRO had opened 13,050 feet high Rohtang Pass on the Manali-Leh highway for traffic two days back. There was fresh snowfall on Sunday, which again disrupted traffic movement toward Lahaul Spiti. Residents of the district said the chill was back after fresh spell of snow. The district headquarters Keylong received 5 cm snow, while Marhi recorded 15 cm and Rohtang Pass around 30 cm fresh snow till the evening.

There were reports that some vehicles were on their way from Koksar toward Manali but the drivers had to return back as the road was not good for safe driving. However, inter-valley traffic movement of the district was as usual. However, fresh snow has sent the entire region reeling under cold and people were forced to stay indoors during the day to escape from biting cold.

Talking to The Tribune Mohan Lal Relingpa, a native of Malang village in Lahaul valley, said due to snowfall since morning entire area had been covered under thick blanket of snow.“For the last few days after weather cleared, farmers of the district had started potato, peas and other vegetable cultivation. But now they feared that the snow would damage seed of peas and other vegetables as these require some temperature for sprouting”, he remarked.The residents of Miyar valley and from Tandi ahead toward Peukar village in Tod valley were suffering due to lack of road connectivity since January as the PWD had failed to clear snow.

Sub Divisional Magistrate Manali HR Bhairwa said as the road was rendered unfit because of snowfall traffic movement had been suspended keeping public safety in mind. Traffic would only be allowed once snow over Rohtang Pass was cleared.BRO Commander Mayank Mehta he said inclement weather today had hampered snow clearance operation and the BRO was hopeful that the road would be opened till Monday afternoon if weather remains good.

As far as hill getaways are concerned, Dharamshala is on the been-there-done-that list of just about anyone. But then that is for the average...
Read more
Khurk

Solan, Sep 15: A body of 25-year-old woman was on Friday found from a bag dumped in a dustbin near Vardhman Chowk on Sai...
Read more
Elections

The district Congress seems to be gearing up for the success of Congress vice-president Rahul Gandhi’s October 7 Mandi rally. The move of the...
Read more
Himachal

Thankfully, April comes only once a year and that also restricts the number of fool's days also to the first of April. Playing a...
Read more
Blogs

Because Some Trips Are More Than Just Trips

Sometimes a single hug can make all the differences of years go away. This TVC of MakeMy Trip shows why some trips are very important. https://www.youtube.com/watch?v=KK65XAznxbM
Read more