5 Killed In Cars Accident Near Rohru In Shimla 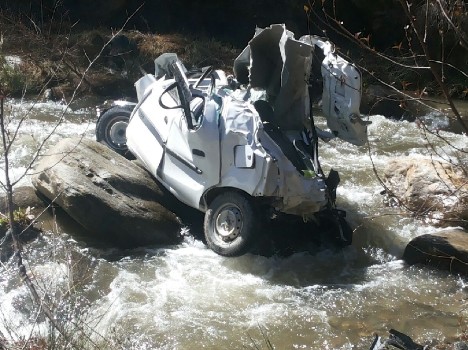 On Tuesday, a car (HP-10A-8773) fell into a 130 meter deep gorge, killing all its four passengers. The victims were identified as car owner Harwant Singh of Dogri- Devidhar, Sunil Kumar of Chiwadi, Kishori Lal of Baneti, and Pardeep of Golchha. All four were returning home from the Lavi fair at Rampur. Based on a complaint by the victim’s kin, that the vehicle veered off the road due to rash and negligent driving of the driver, police have registered a case of rash and negligent driving.

In another accident, Sat Pal died on the spot after his car (HP-08A-2150) rolled off the road near Badach on Monday. It fell 800m down in Shantha Khud. Police have registered a case of negligent driving.

SHIMLA, March 16: The BJP today dubbed the 2017-18 Himachal Budget as a “bundle of announcements and jugglery of figures” and claimed it would...
Read more
Himachal

Shimla May, 16: Rain with storm brought the temperature down in the valley today providing a relief from the scorching heat. The sky was overcast...
Read more
Himachal

Authorities drive to remove encroachment along NH-70 for widening

Shimla, June 10: The national highway (NH) authorities have initiated a drive to remove encroachments along NH-70 and NH-80 for widening the highway. It was...
Read more
Himachal

People of Shimla will punish Congress and CPM both: Rajiv Bindal

Shimla, June 6: The people of Shimla would punish the Congress and the CPM for failing to supply water and jaundice outbreak, said BJP...
Read more
Load more
KHURKI

That adjective in the title is so accurate. Mad Max: Fury Road is a violent film, but the violent acts in this world don’t feel...
Read more
Bollywood

While we are still reeling under the hangover of Tanu Weds Manu Returns, the reigning Queen of Bollywood Kangana Ranaut is all out to promote her...
Read more