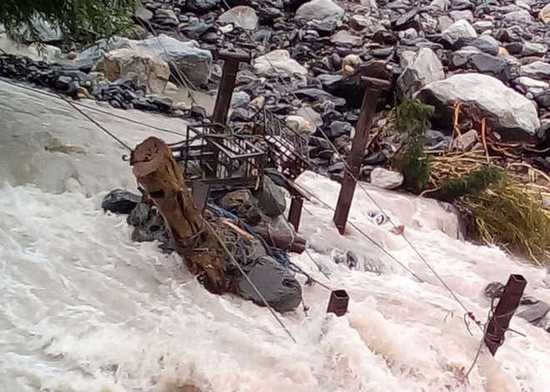 Shimla, Aug 3: Heavy rain led to flash flood in the tribal district of Lahaul-Spiti damaging 500-m-long stretch of a road connecting 10 villages of the Miyar valley. Apart from this, there was considerable damage to cash crops. A flash flood in a nearby rivulet at Karpat village yesterday washed away a footbridge, a ropeway and a rain shelter.

The villagers have no option but to take shelter in the open and to wait for the situation to become normal.The affected villagers urged the state government to direct the district administration to restore the road otherwise their remaining crops would be ruined.

Amarnath, pradhan, Tingret Gram Panchayat, said about 10 villages had been cut off due to the damage caused to a road in the Miyar valley.“These villages include Tingret, Udgose, Changute, Chhaling, Shukto and Karpat,” he added.

Prem Dasi, pradhan, Chimret Gram Panchayat, said the people of Karpat village were taking temporary shelter in the open. “The rivulet is flowing close to the village, which may pose a threat anytime if it changes its course,” Prem Dasi added. “We have urged the district administration and the state government to shift the villagers to safer places till the weather improves.

We have also requested them to restore the road connectivity to the village, which will help them to transport their produce on time,” the pradhan said.

Lahaul-Spiti Deputy Commissioner Deva Singh Negi said there was no loss of life reported, however, a road was damaged partially and a footbridge and ropeway was also damaged. He said the workforce and machinery of the Public Works Department had been deployed in the region to restore the road at the earliest. However, he ruled out any threat to the village and said the district administration was monitoring the situation minutely.

Shimla, May 30: The HP High Court on Monday directed the State Election Commission to frame a programme for general elections of the Municipal Corporation...
Read more
Load more
KHURKI