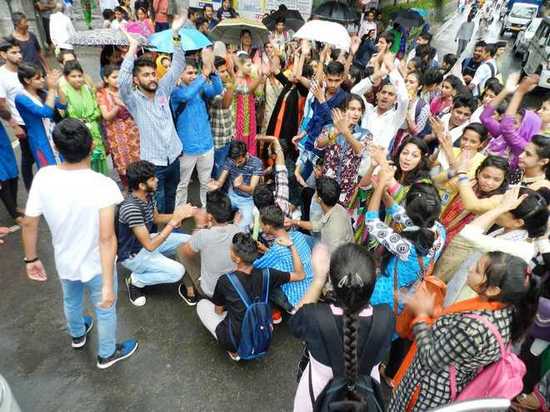 Shimla, July 20: Hundreds of students of MCM DAV College boycotted their classes and took to streets against the government and the police for dealing roughly with the Kotkhai minor’s rape. The protesting students were raising the slogans for justice to the Kotkhai minor. They marched through the main market of the town and protested at Tehsil Chowk of the town and blocked the highway.

The students held a protest on the premises of the SDM office too and raised anti-police slogans. They observed a two-minute silence.The Shahpur Students Association took out a candlelight march and demanded sacking of the state government and imposition of the Governor’s rule in the state in view of the deteriorating Law and order situation.

Solan: The locals took out a march against the brutal killing and gangrape of a Kotkhai girl at Chail where all business establishments remained closed till afternoon.The locals marched through the town and raised slogans demanding justice for the minor girl. They also raised questions at the inept handling of the police and demanded immediate justice for the girl.

The people expressed their solidarity with the family of the deceased and said the real culprits should be arrested soon.Similar protests were also witnessed at Solan last evening where people had gathered on The Mall in protest against the shoddy investigations.

Students on roads in Mandi, Kullu Mandi: The public outrage against the Kotkhai gangrape is spreading rapidly across the state and a large number of people and students staged a protest in Mandi and Kullu today.

Himachal Pradesh: SR Mardi Might Be The New DGP

New Excise Policy Of Liquor, Tourists Are Being Overcharged!

Shimla May, 20: New excise policy of the state government to fix minimum selling price and doing away with earlier practice of fixing the...
Read more
Himachal

There is no denial in the fact that summer has strengthened its position in India. And with the ongoing heatwave over most parts of...
Read more
Himachal

Shimla, July 25: The CBI inspected the spot of rape and murder of the minor girl in Haliala forest in Kotkhai and also questioned...
Read more
Himachal

Shimla, May 30: Hailstorm in Kullu damaged fruit crop to the tune of Rs 10 crore on Sunday. The damage was caused to apple,...
Read more
Load more
KHURKI

Pappu Can Only Make Us Laugh Saala!
Read more
Lifestyle

Here's a story of a guy who loves his girlfriend immensely but one incident in the life of one of his friends makes him so...
Read more