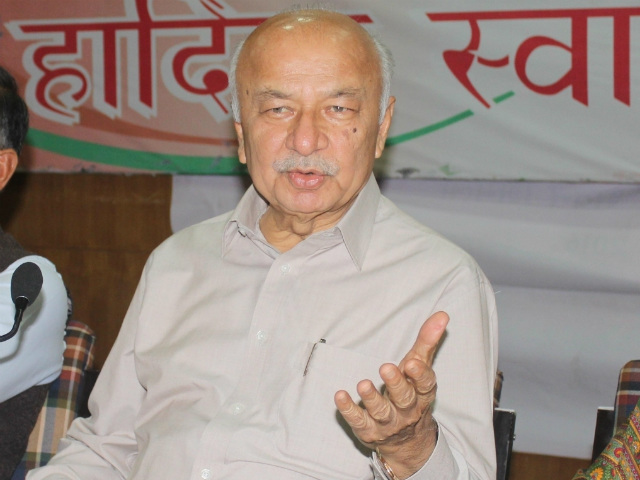 Shimla, Aug 4 : Notwithstanding the animosity between the two warring factions in the Congress, AICC general secretary Sushil Kumar Shinde today sent a loud and clear message that the organisation would always take precedence over individual.

Shinde, along with AICC secretary and Lok Sabha MP Ranjeet Ranjan, who has been appointed co-in-charge of Himachal affairs, addressed the state executive of the Himachal Pradesh Congress Committee (HPCC). All office-bearers of the HPCC, district and block committee presidents and heads of all frontal organisations attended the meeting.“I am the representative of AICC president Sonia Gandhi and Rahul Gandhi.

While appointing me the in-charge for Himachal, they told me that you were being assigned the task of forging unity in the party,” said Shinde. He, while citing his own example, said minus the status given by the party, he was merely another individual so everyone must understand that the organisation was supreme.Shinde urged all party leaders to work unitedly to fight the BJP and ensure good performance in the Assembly polls.

“I still remember when I was in-charge of HP in 1993 when Virbhadra and Sukh Ram did not see eye to eye, I will try to take everyone along as this is the need of the hour,” he said. In a bid to put an end to the infighting, he also directed everyone not to make any statements against each other in the media, as it harmed the party.

Shinde informed the office-bearers and party leaders that he would be touring the entire state and begin his travel from August 16 and 17 in Kangra, August 18 in Mandi, August 19 in Kullu and August 20 in Lahaul Spiti. AICC secretary Ranjeet Ranjan Jha, in her address, condemned the sloganeering by a section of the party at Peterhoff yesterday. “What happened yesterday is condemnable but I am glad that the other group did not retaliate with similar behaviour,” she said. Irrigation and Public Health Minister Vidya Stokes and Health and Revenue Minister Kaul Singh Thakur also addressed the gathering.

Door-to-door collection of garbage, yet heaps of garbage a common site in Shimla

Shimla, June 16: Notwithstanding the tall claims of the success of the Swachh Bharat Mission, the door-to-door garbage collection scheme of the Shimla Municipal...
Read more
Himachal

He has always indulged in such theatrics: CM on Mankotia

Shimla, July 8: Chief Minister Virbhadra Singh on Friday said that the people of the state were well aware of the changing loyalties of...
Read more
Himachal

Hills In Himachal To Get Even More Snow This Year!

Shimla May, 3: Where Punjab and Haryana failed, Himachal Pradesh delivered. The HP Board of School Education achieved the 100% target of distribution of...
Read more
Load more
KHURKI

Watch Arunima Sinha, The Woman Who Climbed Mount Everest With One Leg

In our life, there are a lot of things that can provide us inspiration. But nothing beats seeing other people fight odds to achieve...
Read more
Humour