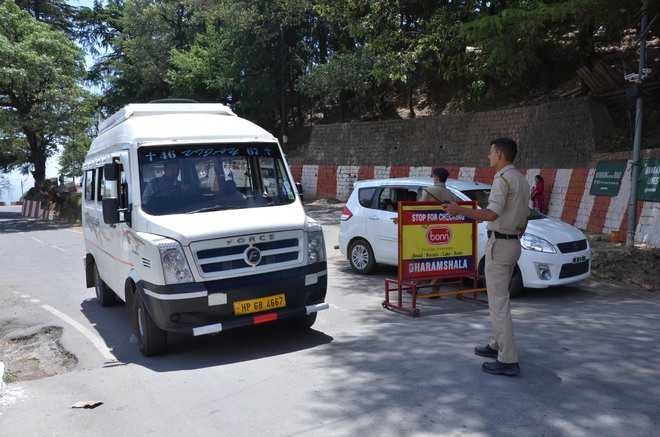 Shimla April, 29: Hoteliers of upper Dharamsala are at loggerheads with the police over traffic diversions in McLeodganj. The Hoteliers Association met Kangra Divisional Commissioner Nandita Gupta and objected to the traffic plan. General secretary of the association Sanjeev Gandhi said tourists coming to McLeodganj, Dharamkot and Bhagsunag were being forced to move through the Dal Lake road. “The traffic is being diverted from Forsythganj and the visitors are being forced to ply on narrow road from the Dal Lake to McLeodganj Square.

Most of the tourists coming here are angry and complaining about the inconvenience,” Gandhi said. Most tourists coming here are from the plains. “They are apt at driving on narrow lanes. To add to the traffic problem, the local taxi union parks its vehicles on the narrow road. Most hotels are now offering the ‘Mechanic on Call’ service as the tourists are being forced to drive on narrow and steep roads,” he said. Kangra SP Sanjeev Gandhi said the peak tourist season was arriving. “The area is paralysed by traffic jams and tourists and locals remain stranded on roads for three to four hours. The traffic diversion from Forsythganj to the Dal Lake road is the only solution,” he said.

The SP added that it was mandatory for them to keep roads leading to the McLeodganj clear due to security reasons in view of the presence of the Dalai Lama. Other measures are also being to taken to tackle the problem. “I have written to the Deputy Commissioner and transport officials to stop the plying of Volvo buses to McLeodganj. We intend to create parking space for Volvo buses on the Dharamsala bypass during the peak tourist season. For tempo-travellers, parking will be created near Forsythganj church. Only cars will be allowed in the core tourist area. This will hopefully decongest the area,” he said.A road was proposed to connect the Indrunag area to Bhagsunag during the stint of previous BJP government. However, its work is still incomplete. In case, the road is completed, the traffic going out of Bhagsunag can be diverted on the road.

Dharamshala, Sep 21: With the Assembly elections in Himachal drawing close many industrialists, retired employees and influential people are throwing their hats in the...
Read more
Himachal

Shimla, Aug 29: After being pulled up by the High Court, the CBI has sought high-resolution satellite images of the exact movement of the...
Read more
Himachal

Shimla May, 17: Chief Minister Virbhadra Singh on Tuesday said that neither he nor his government was shielding the controversial godman Baba Amardev of...
Read more
Load more
KHURKI

20 Chalkboards That Compel You To Enter The Bar!

Guy Skips Rocks On Frozen Lake & What Does He Find?