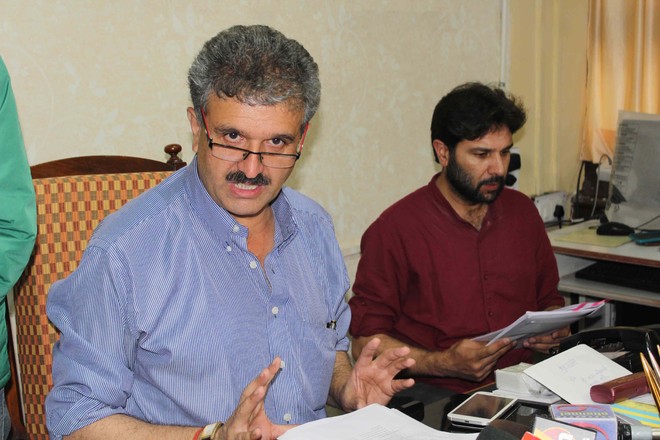 Shimla, June 5: The Mayor and the Deputy Mayor of the Shimla Municipal Corporation, Sanjay Chauhan and Tikender Singh Panwar, of the CPM, resorted to a novel way to list out their achievements by giving themselves four out of 10 marks for their performance as their five-year term ended.

In spite of only 12 per cent representation in the House and hindrances created by the BJP and the Congress in their working, they tried to perform to the best of their ability and worked with sincerity, honesty and integrity, the two said on Sunday. They bailed out the corporation and generated resources to make payment for salary to employees in spite of the fact that wage bills mounted from Rs 35 crore to Rs 60 crore.

The government worked against the SMC in getting the Smart City status and the SMC had to file two writ petitions for Smart City and plying of battery-operated vehicles. The challenges were huge but the corporation bettered the financial health of the SMC, made effective intervention on the water front, fought jaundice epidemic and was instrumental in the formation of the Greater Shimla Water Supply and Sewerage Circle (GSWSSC). This brought a qualitative change in water and sewerage management.

Further, to ensure a 24×7 water supply, more than 80 per cent of the work had been done in respect of the Kol Dam lift water scheme and negotiations with the World Bank were in the final stages.

Shimla, Aug 29: The Himachal Pradesh Board of School Education (HPBOSE) is expected to release the admit card for the Teacher Eligibility Test (TET)...
Read more
Himachal

Dark Side Of Snow For School Students in Himachal’s Narkanda!

Shimla, Aug 14: Some parts of Himachal Pradesh may experience heavy rain till Tuesday, a weather official said on Monday. “There are chances of...
Read more
Himachal

Shimla, Aug 24: Five persons of a family, including a three-year old girl and two women, were killed when the car by which they...
Read more
Load more
KHURKI

In search of that elusive fountain of youth! Ageing has to be the most loaded word in English language; the word seems to stoop low...
Read more
Bollywood