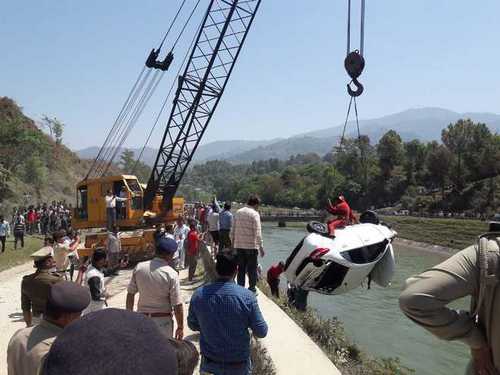 Shimla April, 16; Four persons were feared dead when the car they were travelling in fell into the BBMB canal at Hatgarh near Balah in Mandi district last night. One of the occupants had a narrow escape.

“The car was on way from Sundernagar towards Diargi when the driver lost control over the vehicle near Balah, following which it fell into the canal. Puneet Gupta of Diargi in Mandi, working in the merchant navy, was driving the car,” said Balah tehsildar Jai Gopal Sharma.

Puneet (22) swam to safety while four others, all in their twenties, were missing. Mandi DSP Rajesh Kumar said the accident occurred around 10:30 pm. The police launched a search operation, but could not locate them. “Divers were called today for the search operation, but there was no information about the missing victims till the time of filing of this report,” he said.

The missing are Himanshu Gupta (19), who is Puneet’s brother, and Abhishek Kaundal (20), Aditya Sahuta (20) and Sonu Sahu (20), residents of BBMB Colony in Sundernagar.1 killed in road mishap Kangra: One migrant labourer from Uttar Pradesh was killed and three others injured today when the tractor-trailer they were travelling in overturned near Baroh village in the subdivision today. Kangra Subdivisional Police Officer  Surinder Sharma said the tractor-trailer was taking the labourers to a construction site when it overturned on the Jasai village road. Chaiter Pal (28) died on the spot. Bittu (22),  Ramesh (50) and driver Vinod (28) were injured in the accident. They were taken to the Tanda medical college.The police registered a case.

Malana, an ancient village in scenic Kullu district which is infamous for its cannabis production, has now resolved to fine the villagers and others...
Read more
Himachal

Shimla, July 11: Irked over the “silence” of the Congress organisation over the salvo fired by senior Congress leader Vijay Singh Mankotia against him,...
Read more
Himachal

Shimla, June 15: The summer tourist season in Himachal Pradesh is nearing its end, but the government has still not introduced electric buses especially on the Manali-Rohtang...
Read more
Himachal

Shimla, July 24: Left to fend for herself after the arrest of her son Rajender alias Raju, Kesri Devi has debunked the police theory...
Read more
Load more
KHURKI

RaGa, Earthquake And The Twitterati

Hell hath no fury like Mother Nature scorned! Pretty evident from the Saturday's earthquake, isn't it. But Twitterati's favourite RaGa-bashing reaction was to be seen...
Read more
Blogs

One field that one doesn't expect to meet a Khurki is POLITICS. But, as we are looking around very closely for Khurki in all fields, we found...
Read more