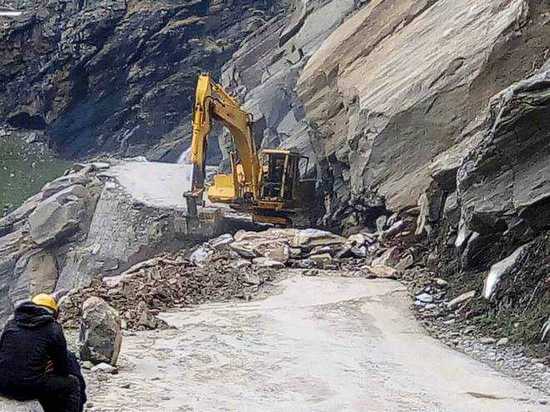 Shimla May, 5: An avalanche at the Rani nullah and a landslide near the Beas nullah on Friday evening blocked the Manali-Keylong highway, disrupting the traffic movement. Aviral Jain, officer in charge, Border Roads Organisation (BRO), said a landslide near the Beas nullah, about 30 km on the Manali-Rohtang road, blocked the road disrupting the vehicular movement.

He said efforts were on to clear the debris and the road was expected to be cleared by this evening. A huge avalanche at the Rani nullah, about 45 km from here, has also blocked the highway. Jain said the avalanche was so massive that it engulfed the entire patch of the road. “It can take some time to clear the snow,” he said.

The BRO had cleared snow from the Manali-Rohtang-Keylong highway last month and the road was opened for vehicles on April 28. Meanwhile, high reaches in the Rohtang region are experiencing mild snowfall, while the lower areas are getting rain since the last few days. The sudden surge in day temperature is causing the snow to melt fast, thus triggering avalanche and landslides in the area.

As far as hill getaways are concerned, Dharamshala is on the been-there-done-that list of just about anyone. But then that is for the average...
Read more
Travel

Without music, life would be a mistake. At least that's what a wise man said. And trust me there cannot be more truth in...
Read more
Himachal

Shimla, July 31: Gearing up for the Assembly elections in Himachal Pradesh, the BJP has decided to launch "Rath Yatras" in all the 68...
Read more
Himachal

Shimla, June 15: In a major relief to the chairman of the HP State Pollution Control Board (PCB), the HP High Court on Thursday...
Read more
Himachal