Four Houses Destroyed In A Fire In Himachal’s Kinnaur, No Deaths Reported 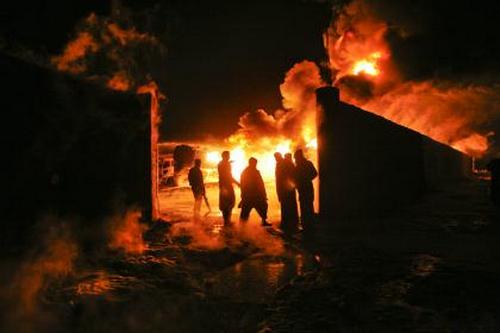 KINNAUR March 25 : A major fire gutted four houses while one was partially damaged in Kinnaur’s Kothi village early morning today. The fire was controlled after five hours and the administration is assessing the damage. All the houses were made of wood in traditional hill architecture. Two of the damaged houses were empty while from the other three, people along with the cattle were saved. However, five families were affected by the damage in the fire. A temporary arrangement is being made for the villagers. “Initially Rs. 10,000 reliefs is being given to each family of the village,” Sub-Divisional Magistrate Avaninder Kumar confirmed.

No death has been reported yet.

Shimla May, 9: BJP MP from Kangra Shanta Kumar said on Monday that the BJP would win with three-fourths majority in the forthcoming Assembly...
Read more
Himachal

Himachal Will Get Due Share In BBMB Projects: Virbhadra

Shimla May, 19: Chief Minister Virbhadra Singh said that the Supreme Court had legitimized the demand of the state of 7.19 per cent share...
Read more
Himachal

Shimla, Aug 24: Five persons of a family, including a three-year old girl and two women, were killed when the car by which they...
Read more
Himachal

The demonetisation has taken the nation by a storm. Whether it is good or bad for the nation that time would tell, but that's...
Read more