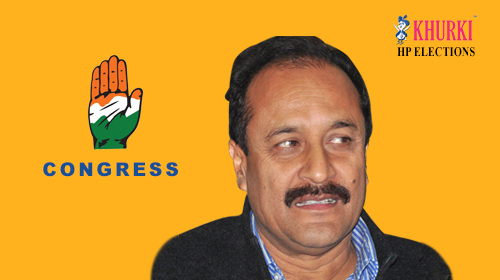 Ajay Mahajan is MLA from Nurpur. He is from INDIAN NATIONAL CONGRESS. He is son of late Shri Sat Mahajan (Former Minister of H.P. Govt. & M.P., Lok Sabha). He was born on 12th September, 1958 at Amritsar (Punjab). He is BA from SMDRSD College Pathankot in 1980. He is married to Smt. Veni Mahajan. He is an Agriculturist & Businessman.

Ajay Mahajan is MLA from Nurpur. Nurpur is a city and a municipal council in Kangra district in the Indian state of Himachal Pradesh. It was formerly a Kingdom ruled by the Pathania clan of Tomara Rajputs, since the 11th century AD. The capital of the Kingdom was at Pathankot formerly known as Paithan, now in Punjab. As of 2001, according to the India census, Nurpur had a population of 9045. Men constitute 52% of the population and women 48%. Nurpur has an average literacy rate of 78%, higher than the national average of 59.5%: male literacy is 81%, and female literacy is 75%. In Nurpur, 11% of the population is under 6 years of age.

Ajay Mahajan is the MLA from Nurpur. He is associated with INC. He was elected as MLA from this Vidhan Sabha seat in the elections held in 2012. He won by a margin of 19678 votes. Ranbir Singh Nikka of BJP was the trailing candidate.

Shimla, June 22: The south-west monsoon is likely to arrive in Himachal in the last week of June. It has reached Bihar till date...
Read more
Himachal

Shimla, May 27: The Human Resource Development Ministry on Friday decided to scrap the four-staged recruitment process of teachers at the National Institutes of...
Read more
Elections

What’s Varun Doing With Shraddha In The Recording Studio?

Shraddha Kapoor we all know has the singing talent. But Varun Dhawan too? Read on! Snapped outside Sachin-Jigar’s recording studio, were dance flick ABCD 2's lead...
Read more