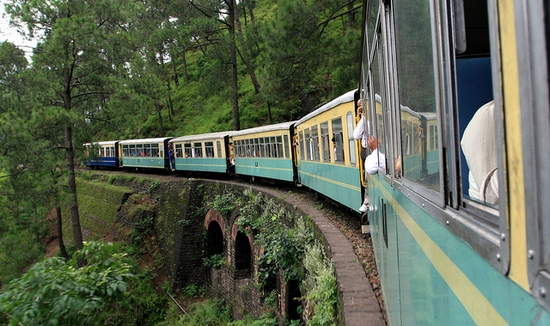 Saturday’s accident that killed two foreigners on board the Charter Special Toy Train at the Kalka-Shimla heritage railway track has failed to deter tourists. Terming it a routine accident, a few travellers on board the Kalka-Shimla Toy Train today said since no mechanical defect had been detected, there was no need to panic or fear. On their maiden visit to Shimla, UK-based couple Dyug and Sara said the panoramic view offered by the mountainous track amid the narrow gauge was akin to the railway tracks in the UK. They said they were keen on seeing the ancient architecture.

“We had planned a visit to Shimla before the accident. The mishap has not affected our travel plans,” said Dyug, adding that she wanted to see the bridges and tunnels along the track as those were listed on the world heritage map by UNESCO.

The couple said they loved travelling by train and since media reports had pointed towards human error, such journeys posed no threat.
Going to Shimla for an interview, Ayushman, a student from Noida, said the thrill of travelling through a narrow gauge had made him opt for the journey.
He said he didn’t feel like going by road as the accident had not occurred due to a mechanical defect.

Five toy trains move uphill and downhill on a daily basis on the track. Foreigners often travel on the route.

Vishvajeet, a government official, said since charter trains were different from toy trains, chances of such mishaps were more.

A group of youngsters from Hisar and Mahendergarh in Haryana appeared nonchalant about the accident. They said mistakes could be rectified and toy train journeys were safe.

With people, including elderly women, routinely boarding and alighting from the toy trains at various stations like Dharampur, Barog, Solan and Kandaghat, there appears to be no impact of the Saturday’s toy train accident. The exact cause of the accident is yet to be ascertained, but it seems that passengers have already given a clean chit to the railway staff.

Shimla, June 19: Fearing poaching by ruling Congress ahead of election of Mayor and Deputy Mayor of Shimla Municipal Corporation (SMC), the BJP has...
Read more
Himachal

Shimla May, 8: Chief Minister Virbhadra Singh is likely to meet key Congressmen, including some councillors, who don’t want the MC elections to be...
Read more
Himachal

Priyanka Chopra, one of the most versatile and talented actresses of Bollywood, while talking about her upcoming film Dil Dhadakne Do ended up revealing a...
Read more
Flicks