Women Empowerment A Priority Of The State: Minister GS Bali 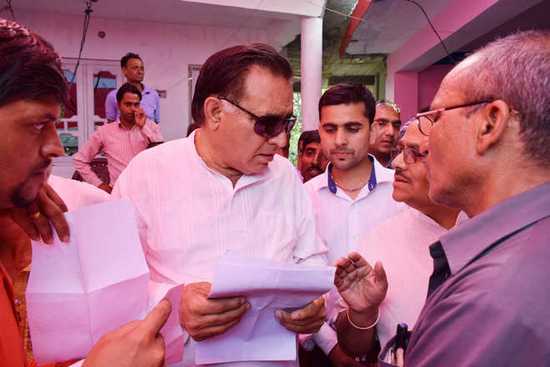 Shimla, May 25: Food and Civil Supplies Minister GS Bali said on Wednesday that women empowerment was the priority of the state government. He was addressing public meetings in connection with ‘Your MLA at your doorstep’ programme at Bhalol, Thana Bargran, Manraila and various other villages of the Nagrota Bagwan Assembly constituency.

He said to strengthen the women empowerment programme, priority would be given to ‘Ekal Naris’ — widows sustaining their families, mahila mandals and women cooperative societies. He said the state government had kept budgetary provisions for unemployment allowances to the tune of Rs 150 crore for the current financial year.

He said Class VII pass unemployed youths from the families having less than Rs 2 lakh annual income would be benefited by this programme. He said under the Mahatma Gandhi School Uniform programme, all students of government schools in the state up to Class X were being provided free school uniforms, besides students from Classes I to XII studying in government schools and Kendriya Vidyalaya were provided free transport facilities through HRTC buses.

Bali announced Rs 3 lakh for a community hall to be constructed at Sunni village and HRTC bus service from Ranital via Kandi Luhna-Nagrota Bagwan. He announced Rs 60,000 for a retaining wall at Pandool village. He directed the IPH authorities to install two hand pumps at Sahrotri and one each at Sudh, Bargran and Sunni villages. He also announced an overhead tank for Chanderoat village.

Cleanliness Drive Ahead Of Narendra Modi’s Visit To Shimla

Shimla, Aug 10: At least 20 women were injured as a house collapsed while they were condoling a death in a family at Sudhed...
Read more
Himachal

Brilliance at work is how this can be best explained! Two very emotional mothers get in touch with each other through a 'Mothers Exchange Programme' discuss their...
Read more
Bollywood