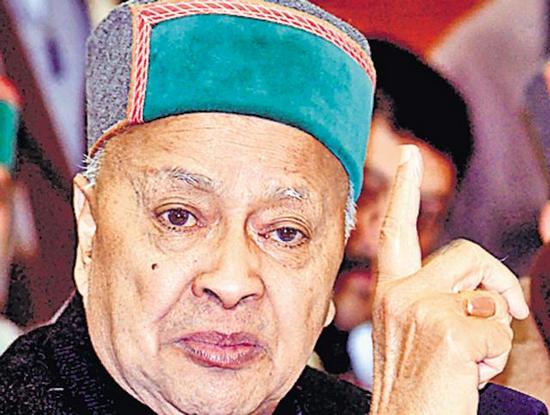 While the Chief Minister abstained from attacking the Narender Modi-government at the Centre, agricultural minister Pathania slammed the Modi government for targeting Virbhadra Singh in connection with income tax related cases with a motive to malign his image ahead of the Assembly elections.

Addressing a public meeting at Anu in Jubbal after inaugurating the Rs 2.50 crore marketing sub-yard and laying the foundation stone of Rs 2.85 crore phase-II of the yard, the Chief Minister said, “Himachal has achieved milestones in the overall development mainly in education and road connectivity”.

Urging farmers to diversify into vegetables and other horticultural activities Virbhadra Singh said the marketing yard would facilitate local farmers of 18 local Panchayats and the neighbouring area of Uttarakhand. “The farmer can store, market and get a better price for their produce. This will save them from the clutches of middle men nearer their homes”.

Rohit praised the Chief Minister saying that the road was refurbished, widened and would be opened for general public as soon as possible. “Local BJP leader resorted to Satyagraha when the work was about to start and when the road is nearing completion, he is re-trying to politicise the issue”, he charged.

Pathania cautioned people and said they should think twice before investing in pension schemes as announced by Prime Minister Narendra Modi. “Achey Din had come for BJP leaders, but for the common man it had become difficult to purchase even pulses and meet other daily needs. Petrol, which should have been around Rs 18 to Rs 20 per litre, was now being sold almost at Rs 73 per litre”, he said.

Shimla, July 24:  A team of the CBI started investigation in the twin cases of rape and murder of a minor girl in Kotkhai...
Read more
Himachal

Shimla, June 19: As a part of its strategy to foil ruling Congress’s desperate move of poaching on four independents and a “black sheep”...
Read more
Himachal

Alia Bhatt, who is all known for her bubbly and cute nature, is in love. And this time, it is not someone but something. There...
Read more
Humour

If you think you have faced awkward situations in life, then brace yourself for what is coming. Because by the end of this blog...
Read more