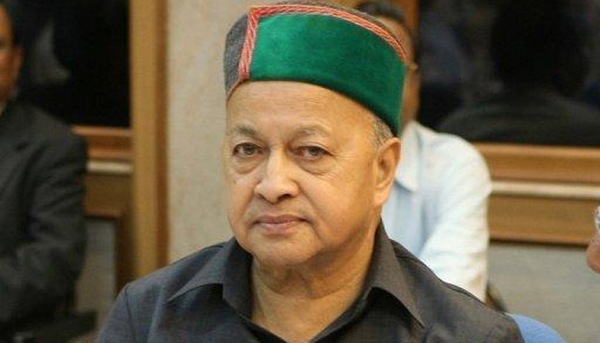 Shimla April, 20; The Enforcement Directorate (ED) today refused to give any assurance in the Delhi High Court that it will not arrest Himachal Pradesh CM Virbhadra Singh when he appears before it tomorrow to record his statement. The Himachal Pradesh Chief Minister has been summoned by the ED to appear before it tomorrow for recording his statement in a money-laundering case against him, his wife Pratibha Singh and others. The submission was made before Justice R K Gauba by the ED during the hearing of Singh’s plea for quashing of the money-laundering proceedings against him.

The court was hearing arguments on behalf of Singh and will continue to hear them on April 24.The stand taken by the agency comes in the wake of the charge sheet filed by CBI against Singh and his wife in a disproportionate assets (DA) case.The CBI had filed the charge sheet hours after the Delhi High Court on March 31 had refused to quash the FIR lodged against Singh in the DA case. The high court, which rubbished the Chief Minister’s claim that the FIR was the result of a “political vendetta”, paved the way for criminal proceedings which were stalled due to an October 1, 2015 order of the Himachal Pradesh High Court, restraining the CBI from arresting, interrogating and filing the charge sheet against the accused.

The ED had earlier termed as “premature” Singh’s plea for quashing of the money laundering proceedings. It had said the plea seeking stay on the proceedings was “not maintainable” as the inquiry into the matter was in a preliminary stage. The ED had in 2015 lodged the case against Singh and others under Prevention of Money Laundering Act (PMLA) after taking cognisance of a criminal complaint filed by CBI in this regard.CBI had lodged a separate disproportionate assets case against Singh and others alleging that he and his family members had amassed wealth of Rs 6.1 crore between 2009 and 2011 disproportionate to the known sources of income.

Shimla, June 2017: The health authorities here were put on alert after diarrhoea cases surfaced in the district. In Masyani village under the Sakaghat...
Read more
Himachal

Shimla, Oct 26: BJP leader Sambit Patra today lashed out at the Congress government in Himachal Pradesh, saying the Assembly election would be between...
Read more
Himachal

For BJP, Narendra Modi is the face for Himachal Assembly elections

Prime Minister Narendra Modi will be face of the BJP in the coming assembly elections in Himachal Pradesh same as Gujarat. Modi is the...
Read more
Load more
KHURKI

Narendra Modi has become one of the most loved and popular politicians India has ever seen. His international popularity is no less than any of...
Read more
Humour

Long before facebook memories could haunt you for those awkward pictures, there were awkward photos getting clicked and framed! Don't believe us? Open those...
Read more