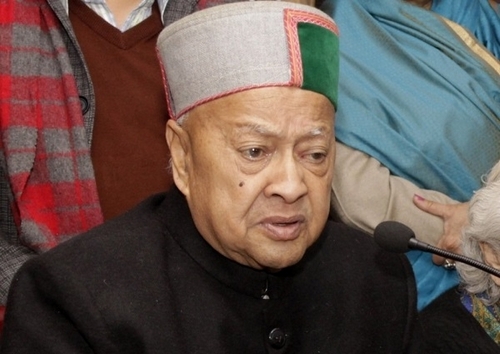 Shimla April, 11;  trouble for Himachal Pradesh Chief Minister Virbhadra Singh, the ED has summoned him for questioning in its money laundering probe against him and others.
The Enforcement Directorate (ED) action comes close on the heels of the CBI filing a charge sheet against him and his wife and others for allegedly amassing assets worth around Rs 10 crore disproportionate to their known sources of income.

Officials said the agency has issued fresh summons to Singh as it wants to record his statement under the Prevention of Money Laundering Act (PMLA).
They said he has been asked to depose before the Investigating Officer (IO) of the case on April 13 here. The agency has summoned Singh earlier too but then he had excused himself stating his official commitments.
It has already questioned his wife Pratibha and son Vikramaditya in this case.
The ED had filed a case under criminal provisions of the anti-money laundering law against the CM, his family members and others after taking cognisance of a complaint filed by the CBI in this regard in September, 2015.
The agency is probing allegations against Singh and his family members of having amassed wealth of Rs 6.1 crore disproportionate to his known sources of income between 2009 and 2011 when he was the Union Minister of Steel. It has also attached assets worth about Rs 14 crore in this case under PMLA laws.
The CBI charge sheet, filed sometime back, claims that the politician had amassed assets worth around Rs 10 crore which were disproportionate by 192 per cent of his total income during his tenure as a Union Minister.
The final report filed against nine people for alleged offences punishable under section 109 (abetment) and 465 (punishment for forgery) of IPC and Prevention of Corruption Act, arrayed around 225 witnesses and 442 documents. Besides the 82-year-old Congress leader and his wife Pratibha Singh, the report also arraigned Chunni Lal Chauhan, Joginder Singh Ghalta, Prem Raj, Vakamulla Chandrasekhar, Lawan Kumar Roach and Ram Prakash Bhatia as accused.
HC denies bail to LIC agent: THE Delhi High Court denied bail to LIC agent Anand Chauhan in a money laundering case involving Chief Minister Virbhadra Singh and others.

As far as hill getaways are concerned, Dharamshala is on the been-there-done-that list of just about anyone. But then that is for the average...
Read more
Humour

Weather in Himachal: Rivers in spate after heavy rain

Shimla April, 20; The Enforcement Directorate (ED) today refused to give any assurance in the Delhi High Court that it will not arrest Himachal...
Read more
Himachal

The Governor said drug trade had increased five fold in states like Manipur, Mizoram and Punjab during past one year. Stating that drugs distort society...
Read more
Himachal

Shimla, Nov 2: Monetary benefits, concessions, subsidies, soft loans, jobs and regularisation have been promised by the Congress to one and all in its...
Read more
Load more
KHURKI

In Case You Missed It, Here Is THE Most Hilarious Audition Of Roadies

ROTFL...We sure did!
Read more
Blogs