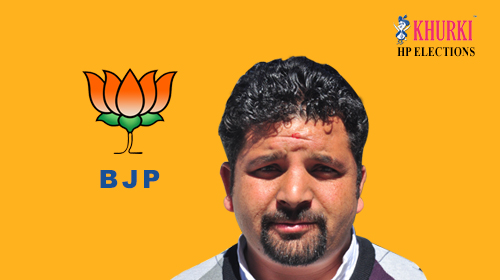 Hans Raj is the Churah MLA. He is the son of Shri Nirmal. He was born on 24 April, 1983 at Dhaiyas, Distt. Chamba. He Post Graduated from Himachal Pradesh University in 2012. He is married to Hameeru Devi.

Churah literally means four paths. In fact, the headquarters Tissa, now Bhanjraru, is a central place of Churah Valley from where paths lead to all four directions linking different places within the district and the adjoining state of Jammu & Kashmir. Churah seems to have been open to trade route from Jammu & Kashmir as it makes boundary with it. Churah valley is endowed with scenic beauty, religious and historical places. Lack of proper communication and transportation facility and lack of due publicity have kept these places away from the eyes of tourists. Bhandal-Kihar, Jasorgarh, Thalli-Bhatkar, Dudar Dhar, Bhukhu Dhar, Devi Kothi, Baira, Bhatmana, Himgiri-Banter and Salooni-Kilod are to mention a few most beautiful places with rich green cover of deodar, ban, kail, spruce and fir. Churah valley has to its credit four beautiful lakes.

Hans Raj is associated with Bharatiya Janata Party. He was elected as Churah MLA in the elections held in 2012. He won by a margin of 2211 votes. Surinder Bhardwaj of Indian National Congress was the trailing candidate.

A 10-year-old boy allegedly committed suicide by hanging himself in a store room near his house in Bagdi village here, the police said on Wednesday. The...
Read more
Himachal

Shimla, Sep 1: Himachal Pradesh government has set the target of controlling Tuberculosis (TB) by 2021-22 well before the nation's target for 2025. State health and...
Read more
Himachal

Shimla, July 27: “We are waiting and waiting for justice. Our struggle is for the dignity of soldiers, but none is bothered.” So felt...
Read more
Himachal

SHIMLA: In Himachal Pradesh, monsoon is set to depart after rainfall killing 40 people and 136 cattle beside causing loss of around Rs 880...
Read more
Load more
KHURKI

Kids are best known for saying wrong things at the wrong time. They are considered to be the presence of almighty on the face...
Read more
Humour

Long before facebook memories could haunt you for those awkward pictures, there were awkward photos getting clicked and framed! Don't believe us? Open those...
Read more