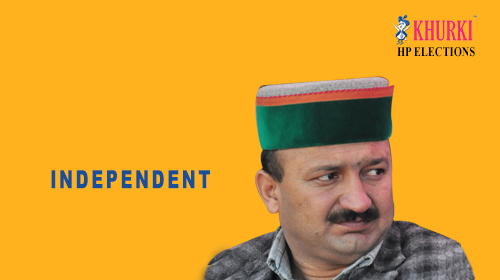 Balbir Singh Verma is the MLA from Chaupal, who won as an Independent candidate. He was born on 4 April, 1971, at Katiyana, Distt. Shimla. Name of his father is Dharam Das. He is a builder and contractor by profession.

Balbir Singh Verma is the legislature from Chaupal. Chaupal is a town and nagar panchayat (city council) in Shimla district. It is surrounded by hills and forests of Deodars. It is also known for its densely covered areas of Cedar trees in the city. According to the 2010 Census, Chaupal had a population of 10,888 people. Of the population, 58% are male, and 42% female. Chaupal has a literacy rate of 89.65%.

Balbir Singh Verma is MLA from Chaupal. He is not associated with any big party and he won as an Independent candidate. He was elected as MLA from this Vidhan Sabha seat in the elections held in 2012. He won by a margin of 647 votes. Dr Subhash Chand Manglate of INC was the trailing candidate.

Shimla,  July 20: Taking a serious note of the rape and murder of a 16-year-old girl from Kotkhai, Governor Acharya Devvrat sought report from...
Read more
Himachal

Shimla, July 17: Deodar forests, about 3 km from Jot pass in Chamba, are dotted with felled and impaled deodar trees and most of...
Read more
Himachal

Frequent jams in Dalhousie creating chaos in the area

Shimla, June 27: To escape the scorching heat of the plains, a large number of tourists are thronging Dalhousie and its adjoining Khajjiar and...
Read more
Load more
KHURKI

Vodka, The Magical Liquid, For You! DIY…

Vodka isn't just for drinking. Did you know that? Yeah, drinking is all that comes to everyone's mind when they hear Vodka, but it's also...
Read more
Blogs