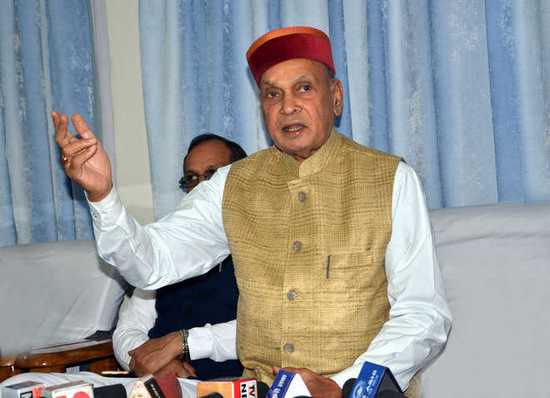 Shimla March, 24; “Himachal cannot afford two capitals,” said Prem Kumar Dhumal, Leader of the Opposition, while addressing a press conference here today. The leader had clarified the stand of the party over Dharamsala as the second capital.He said the state was already reeling under debt. There were not enough funds even to maintain a single capital. The people in Shimla were forced to drink contaminated water in which 32,000 people fell ill and 32 lost their life. He added that if the capital was to be shifted, it would be shifted to Dharamsala but there was no scope of having second capital in small state like Himachal.

When asked about establishing new districts from Kangra, Dhumal said it was for the party to take a call on that. “Our government had even made ADC-rank officials to sit in subdivisions of Kangra to establish new districts. However, leaders of the region in the BJP termed the move as threat to the identity of Kangra which is the oldest and biggest district. We do not want to finish its identity,” he said.He further said the state government had raised loans worth Rs 17,000 crore in the last two years which had increased the debt burden to Rs 60,000 crore. The financial situation of the state was precarious and there was no money for development. This burden had increased despite the fact that the Modi government had restored the special category status to Himachal, which was finished by the UPA government.

Under this special category status, the Centre would bear 90 per cent expenditure of all development schemes comings to the state.The Modi government had also implemented the 14 Finance Commission recommendations and increased the plan outlay for Himachal from Rs 20,000 crore to Rs 40,000 crore, Dhumal said.The former CM also said the Congress government was projecting that it was good for the Kangra region. However, the fact was that the area was being ignored. The Centre had given Rs 100 crore to the state government to develop tourist circuits.

However, Kangra, Una and Hamirpur districts had not been included in the scheme, he said.Dhumal also said the state government was not able to make detailed project reports for national highways announced by the Union Government. This was delaying the development of the road infrastructure, he said.Govt failed on all frontsNURPUR: During the ‘Mafia hatao,Pradesh Bachao’ rally of the BJP at Toki in Indora constituency of Nurpur, the former Chief Minister alleged that it had failed on all fronts.

He said every section of society was being exploited and only mafia raj had flourished. He said students were facing the heat of RUSA system of college education. Earlier, on reaching Bhadwar near Nurpur, a large number of BJP supporters, led by former MLA and state BJP executive member Rakesh Pathania, gave a rousing reception to Dhumal. They also raised slogans against mining mafia active in Nurpur. — OC

Shimla, June 22: Himachal being a consumer state was eagerly awaiting the implementation of Goods and Services Tax (GST) regime as it will result...
Read more
Himachal

Shimla May, 5: Despite unprecedented rains and snowfall, the work at the Rohtang Tunnel Project at North Portal near Sissu in Lahaul Valley is...
Read more
Himachal

Shimla, Aug 16: The district administration today engaged a dog squad in the search operation to locate the body of missing victims, but failed...
Read more
Himachal

The demonetisation has taken the nation by a storm. Whether it is good or bad for the nation that time would tell, but that's...
Read more
Blogs

The internet is flooded with trolls and jokes made on Taher Shah for his new track Angel. Which definitely sounds to us all like...
Read more