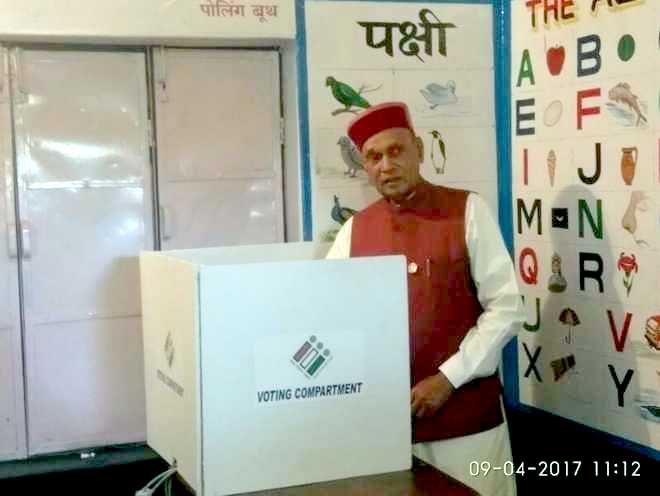 Shimla April 10; The polling for the Bhoranj by election in the district passed off peacefully today with 63.26 per cent voters casting their vote to elect one of the five candidates who are in the fray.District Election Officer and Deputy Commissioner Madan Chauhan said 46,800 voters had exercised their franchise at 99 polling booths in the reserved constituency. The counting will be done on April 13. Despite there being seven sensitive and 12 hyper-sensitive booths, the polling which started at 8 am passed off peacefully with not even a single incident.The polling took place at a brisk pace from the morning hours and continued at a steady pace till afternoon. Almost 50 per cent polling had taken place by 3 pm and over 13 per cent votes were cast in the last two hours. There are a total of 73,485 voters in Bhoranj, including 35,642 men and 37,843 women.

Though polling passed off smoothly, some problem was faced by voters at some polling stations as the Electronic Voting Machines (EVM) and Voter Verified Printed Audit Trial (VVPAT) machines developed snags. As a result, voting had to be halted at 16 polling stations for a few minutes to replace the VVPAT. The EVMs developed snags at four polling stations, including Buhana, Bhakera, Kakera and Chamboh.Upender Nath Shukla, Tehsildar, Election, said there was minor interruptions due to VVPAT and EVMs but these were replaced within a few minutes and the polling resumed.

Voting pattern in favour of BJP: Dhumal Hamirpur:  Former Chief Minister PK Dhumal on Sunday said the people had made up their mind to rid the state of the Congress rule and a beginning would be made from Bhoranj. Talking to the media after casting his vote, Dhumal said the outcome of the Bhoranj bypoll would become the benchmark for the Assembly polls. He said Bhoranj was a BJP stronghold and this time the seat would be won with a bigger margin. He said the polling pattern in the constituency clearly indicated that the BJP candidate Dr Anil Dhiman would win the election comfortably. When asked about the dent that the rebels, both from the BJP and the Congress, would make into the traditional party vote bank, he said it may be damaging for the Congress but it would not make much of a difference to the BJP. OC

Shimla, Sep 12: The Bharatiya Janata Party’s (BJP) preparations in the poll-bound state of Himachal Pradesh are set to receive a shot in the...
Read more
Himachal

Shimla, June 16: Voters have kept the Congress, BJP and CPM  guessing as there are speculations that it could be a hung House as...
Read more
Load more
KHURKI

Click "NEXT" to Start... In India, people follow WWE like anything, with the kids actually worshiping them. We all remember collecting trump cards in childhood, fighting for them and...
Read more
Go to mobile version