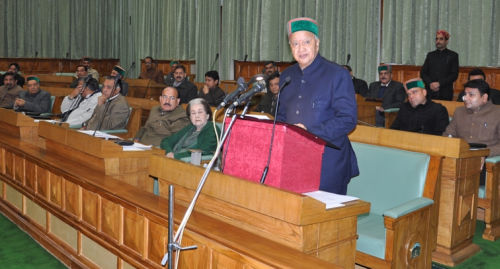 SHIMLA, March 24: Even as Assembly elections are round the corner, winning Bhoranj Assembly bypoll has become a challenge for the ruling Congress. Around 60 leaders have been appointed incharges at sector and village level to oversee the campaign and ensure the victory of its candidate. The party is treading cautiously as earlier Prem Kaushal, a staunch loyalist of Chief Minister Virbhadra Singh, was given the ticket but within a few hours the party decided to field Promila Devi.

Even as many Congress leaders are still trying to figure out why the ticket to Kaushal was cancelled, one of its local leaders Ramesh Dogra has turned rebel, which has further aggravated the problem for state leadership. Sources said that senior party leaders are trying to pacify Dogra to consolidate the position of official candidate.

Transport minister G S Bali said that Promila’s candidature was decided by the high command and the state leadership was taking the election seriously, which became evident with Virbhadra himself present at the time of filing of her nomination papers. He maintained that Promila was a strong candidate and the party would reach out to voters with issues like unemployment allowance and development carried out by the Congress government in the last over four years.
In the 2012 assembly election, Bhoranj seat was won by BJP candidate Ishwar Dass Dhiman but it fell vacant after his death in November, last year. Now, the BJP has fielded his son Dr Anil Dhiman, but presence of a rebel BJP leader Pawan Kumar in the contest has made the election tough as last year he had won the zila parishad election, sources said.

They added that the BJP had an edge as post delimitation, Bhoranj had become a fort of BJP as 26 booths from Bamsan, which is the old assembly constituency of leader of opposition Prem Kumar Dhumal, had been included in Bhoranj. Sources further said that these booths were either from Dhumal’s panchayat or from his adjoining villages.

The BJP on Tuesday took out its first rally from Bilaspur here as part of its programme to save the State from ‘mafia rule’....
Read more
Himachal

Shimla, For Maheshwar Singh of Kullu’s erstwhile royal family, once an ally of the Congress and now back with the BJP, the situation Vidya...
Read more
Himachal

Shimla, July 24: Left to fend for herself after the arrest of her son Rajender alias Raju, Kesri Devi has debunked the police theory...
Read more
Elections

Theog MLA Vidya Stokes Of Congress Profile Vidya Stokes is the Theog MLA. She is associated with Indian National Congress. She is daughter of late Rai...
Read more
Himachal

Is that all that's about a woman - sex? Are we ever going to rise above our sex-oriented thinking?
Read more
Bollywood

‘Katti Batti’ Assumes The Role Of A Moral Science Teacher!

Khurki would want a girlfriend, no doubt!
Read more