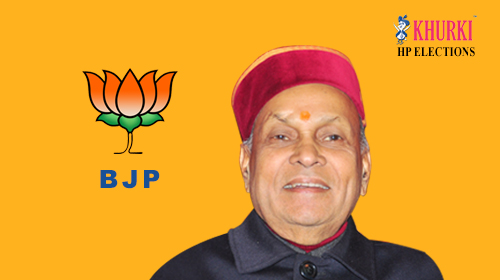 Prem Kumar Dhumal was born on 10th April 1944 in Samirpur village, Hamirpur district. His father was Mahant Ram. Dhumal holds MA and LL.B. degrees following his education at Doaba College in Jalandhar and Guru Nanak Dev University, Amritsar. He became a lecturer at a private college in Punjab. Dhumal married Sheela, with whom he has two sons, Arun Thakur and Anurag Thakur. Anurag is also a politician and has been a member of the 14th and 15th Lok Sabhas.

Hamirpur is the district headquarters of Hamirpur. It is located in a relatively colder region and is bordered by Kangra, Mandi, Bilaspur and Una.

Prem Kumar Dhumal became vice-president of Bharatiya Janata Yuva Morcha in 1982. In 1984, he was selected as the candidate for the Hamirpur parliamentary constituency when the sitting Member of the Himachal Pradesh Legislative Assembly (MLA), Jagdev Chand, refused to contest. He lost that election, won in 1989 and 1991, and lost the seat to Vikram Singh Katoch in 1996. After the sudden death of Chand in 1993, Dhumal became active in state politics. He was president of the Bharatiya Janata Party in Himachal Pradesh from 1993 and became the state’s Chief Minister in March 1998 after winning the Bamsan constituency with a margin of 18,000 votes. He headed the BJP-Himachal Vikas Congress coalition government for its full statutory term of five years and became Leader of the Opposition when the BJP lost power in 2003, winning only 16 seats despite support from the NDA Union government.

Dhumal’s tenure as Chief Minister was not without problems, notably when four BJP ministers and three other BJP MLAs rebelled and made allegations of widespread corruption. This resulted in the rebels being expelled by the state party but then reinstated by the national party, which brokered a deal. The period also saw significant infrastructure developments, particularly of roads, and gave rise to Dhumal being called the Sadak walla Chief Minister.

Dhumal resigned his seat in the Himachal Pradesh Legislative Assembly upon winning the Hamirpur constituency in a 2007 by-election for the Lok Sabha. The by-election came about because of the expulsion of Suresh Chandel, a BJP Member of Parliament who had been involved in a cash-for-questions scandal. A further by-election in May 2008 saw Dhumal replaced as MP by his son Anurag Thakur. Dhumal became Chief Minister of Himachal Pradesh for a second time after being sworn in on 30 December 2007 after the BJP won that year’s Assembly elections. The BJP lost power in the 2012 elections.

Shimla May 12: Chief Minister Virbhadra Singh said on Thursday that Congress leaders should not fight among themselves. He said the elections for the...
Read more
Himachal

Shimla, Aug 24: Five persons of a family, including a three-year old girl and two women, were killed when the car by which they...
Read more
Himachal

Tourists Stranded as Manali-Leh Road Blocked due to Landslide

Shimla, June 1: The newly appointed BJP in charge of the state Mangal Pandey has exhorted the faction-ridden BJP workers in all four Assembly...
Read more
Himachal

My heart melted at the scene!
Read more
Blogs