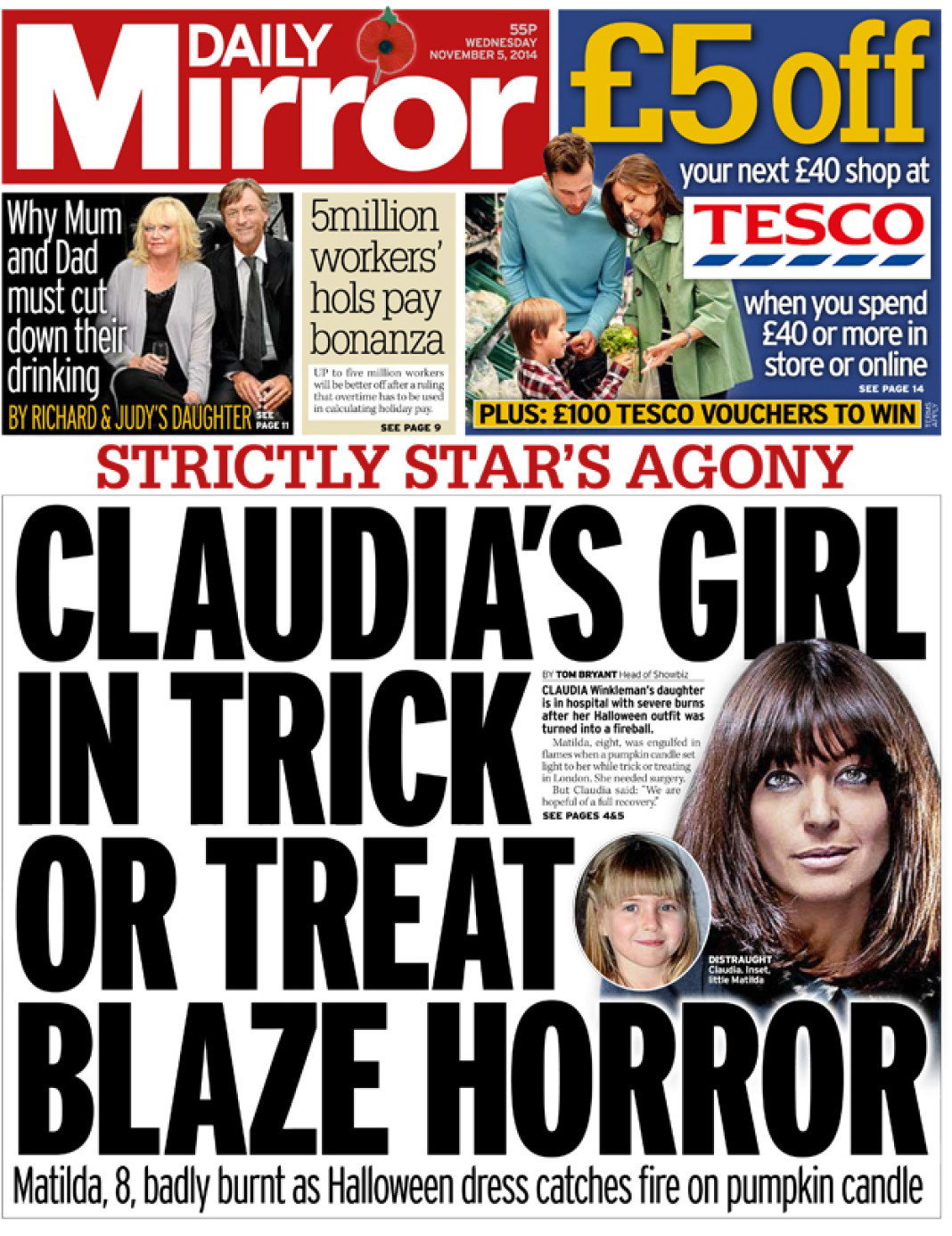 Claudia Winkleman has spoken for the first time about the horrifying moment her daughter’s Halloween costume was engulfed in flames.

Describing the devastating incident that left eight-year-old Matilda in hospital with severe burns, she said: ‘It was really fast … it wasn’t fire like I’d seen.’

In an interview with the BBC’s Watchdog programme, the Strictly Come Dancing co-host, 43, said the accident had been ‘life changing’ for both her and her daughter, adding: ‘I can’t remember life before it.’

She called on parents to be vigilant about what materials they allow their children to wear and to avoid flammable fabrics, saying: ‘I didn’t, and it cost us.’

Tonight’s edition of Watchdog investigates the safety testing for such clothes and conducts experiments to work out the flammability of high street fancy dress costumes, with ‘shocking results’.

I’m joining a Watchdog campaign to improve the safety of children’s fancy dress costumes. It’s on @BBCOne at 8 tonight.

Mother-of-three, Winkleman spoke of her regret at putting Matilda in the supermarket-bought witch costume of hat, cape, stripey tights and a flowing skirt.

The outfit caught alight after touching an open flame and burned so fiercely that a neighbour suffered second degree burns while putting it out with his bare hands. Matilda had severe burns, particularly to one leg.

Winkleman said: ‘I was talking to somebody and then I heard her shout and she was on fire. It feels like she was on fire for hours, but the surgeon said it was probably just seconds.

‘She went up is the only way I know how to describe it – it was a spark and she screamed out for me.

‘It was like those horrific birthday candles that you blow out and they come back. It was really fast, it was fast, it wasn’t fire like I’d seen.’

The accident took place last year during Winkleman’s first series of Strictly as co-host with Tess Daly, 46. She took three weeks off to be at Matilda’s side and when she returned to the show she came close to tears several times.

She told Watchdog: ‘It’s life changing, but not life defining. It was definitely life changing for me. I can’t remember life before it. I wish I had been dressed as the witch is mainly all I wish, that it had happened to me. She went up, and I don’t want that to happen to another child.

I would like parents on Halloween just to think about what they’re going to put their kids in because I didn’t, and it cost us.’

Matilda was trick or treating with her mother near their home in West London and was on a narrow doorstep with nine other children when the fire caught. It was only down to the quick thinking of neighbour Jamie Poulton to put her out that both stopped her injuries being more serious and saved the other children.

The 45-year-old, who owns Randall & Aubin restaurant in Soho, central London, had joined Miss Winkleman, around five other parents and 10 children on their annual west London trick or treating expedition.

He said in the aftermath of the incident: ‘Suddenly, Claudia’s daughter went up in a crackling ball of flame. All the children were wearing the same kit. It was like a potential horror film in front of me, because they were all going to go. Once she goes, then the next one catches and they are all going to go off.

‘They were all on the doorstep together, right next to each other. So I just picked her up and lifted her over the children, got her on the pavement and tried to put her out.’

Poulton said time seemed to slow down as he tried to extinguish Matilda’s flaming costume.

Shockingly, the fabric continued to burn as he patted her and rolled her on the pavement. He said: ‘This material just keeps reigniting and re-burning. And it is sticky, so it melts on the skin. It doesn’t cinder. It remains hot. It was horrific to be honest.

‘I was trying to put it out with my hand. It was a warm night so I wasn’t wearing a jacket.

‘There was nothing immediately to hand to put it out with. Ideally I’d have had something like a towel to douse it all out. But I didn’t have anything. There wasn’t much time to think.

‘I was trying to roll her and pat her clothes. I was trying to rip the costume off her, which didn’t really help because it just ripped and dropped back. It is very bad material. That stuff is terrible.

‘The costumes are very, very cheap to buy. They are nylon and they just go up.’

One of Matilda’s friends, Zoya Bacolv, seven, who was also out trick-or-treating on the fateful night, said: ‘She was outside a house when her cape caught fire, I think she was dressed as a witch. I think it was a candle outside a house that set her cape on fire.

‘I saw her when the ambulance came, they had to wrap her up to put out the fire.

‘She burnt her leg. They put her in a cast thing and put lots of plasters on her leg. She’s going to be hospital for a week. It was really scary.’

It is thought Matilda had several operations, and Miss Winkleman and her husband Kris Thykier, 43, a film producer, said at the time that they believed Matilda would make a full recovery.

A source close to the family said yesterday: ‘Matilda is a brave, brilliant girl and is doing really well and getting better all the time, in large part because of fantastic care she received.’

Tonight’s Watchdog, due to be broadcast at 8pm, warns that it is a serious problem.

She underwent a breast enlargement last year, but Iggy Azalea prompted speculation she has undergone more plastic surgery procedures as she arrived at the...
Read more
Blogs

Like Me Or Love Me, You Definitely Can’t Hate A Taurean

Who is a Taurus? All living creatures born between April 20 to May 20, having the zodiac symbol the Bull are called Taurus. Taurus is all about physical pleasures, material goods, riches, luxuries and whatever that is attractive. Taureans adore...
Read more
Flicks

This beautiful actress, Cameron Diaz, has fans all over the globe and we hope she continues to enthral us with more electrifying performances. Read on...
Read more
Flicks

Rumours and misinterpretations can end up having you looking like a fool. Removing all doubts, no matter what has been said, Kylie Jenner will not...
Read more
Load more
KHURKI

Who doesn't like babies and who doesn't like dogs. Not in that order, maybe! But when it comes to dogs and babies together, our...
Read more
Lifestyle

So you wanna open a bottle with your teeth? https://youtu.be/0OKPMXu96gI Most people, when they lose a tooth, have to go to a dental implant dentist austin...
Read more
Go to mobile version