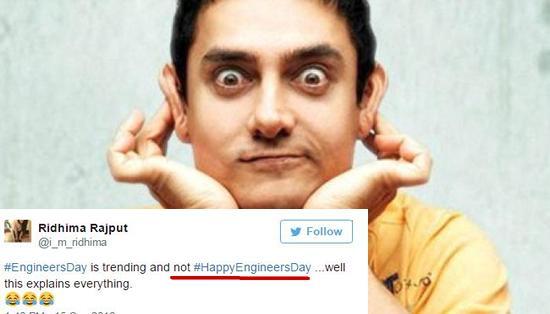 Engineering can make you anything but an engineer. The life of an engineering student or professional is not easy. They are insulted by others and they tend to insult themselves every now and then on social network. Not sure if these tweeples are celebrating the Engineer’s Day or just making fun.

Well, we salute the spirit of being so unconditionally insulting to oneself and others as well. And not to forget that Engineers Day is celebrated on the birth anniversary of Bharat Ratna M. Visvesvaraya. For those who give their today for our tomorrow and then give their tomorrow to joblessness, we bow in respect. 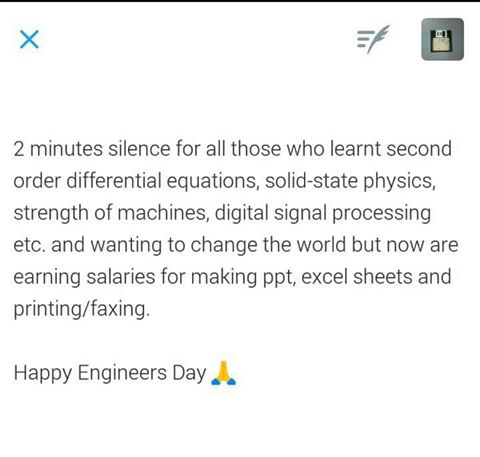 Only thing I m ashamed of being Engineer is even @ArvindKejriwal is also engineer.?? #EngineersDay

Getting the degree on #EngineersDay .
Now time to find inner passion ?

For Rest of India, its #EngineersDay

For South India, its Yengineers Day !!

When a Mechanical Engineer downloads tinder for the first time.pic.twitter.com/S6Lc7HAjSK

Indians are obsessed about making their children either doctors or engineers. Hence, many engineers actually decide what to do, after they complete their engineering....
Read more

A local metropolitan magistrate court on Monday gave "a last chance" to actor Saif Ali Khan to appear before the court on the next...
Read more
Bollywood

We have heard the world say this and that about the Deepika Padukone-starrer short film My Choice, but finally we have the film director...
Read more
Bollywood

Just when you thought Priyanka was crooning her heart out in the title track of upcoming movie Dil Dhadakne Do comes another rocking party...
Read more
Blogs