Know Why Cats Have Been Worshiped Across Religions? 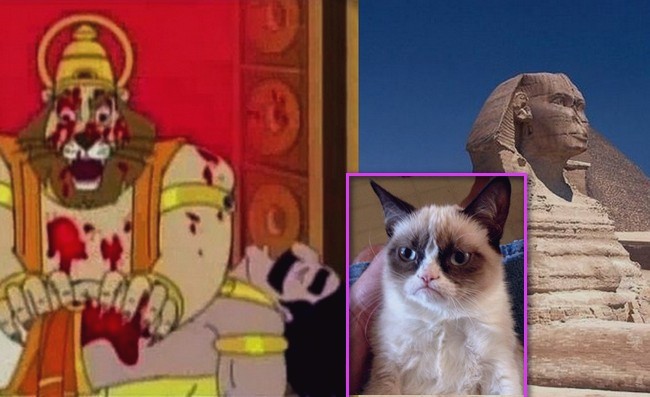 Probably the most familiar cat deity is Bast (also known as Bastet, Ubasti, Pasht or Pakhet) worshipped since the Second Dynasty. The name means “devourer” (feminine). The main centre of Bast-worship was Bubastis (Per-Bast). She was originally the protector goddess of Lower Egypt and depicted as a fierce lioness. She defended the pharaoh and the sun-god Ra. Although she began as a solar goddess, the Greeks changed her to a lunar deity because the associated her with the Greek lunar goddess Artemis, brother of Apollo (and by extension, she became the daughter of Isis and Osiris). This lunar aspect fits well with the cat’s nocturnal nature.

During the New Kingdom, Egyptian mythology created/adopted the fierce lion god Maahes (also Mihos, Miysis, Maihes or Mahes) who was considered the son of Bast. In the Upper Kingdom, Maahes was the son of the fierce lion goddess Sekhmet (Upper Egypt) or Bast (Lower Egypt) – those goddesses were later combined into a single entity hence this confusing dual identity of his mother. His father was either Ptah or Atum-Ra. He also (or originally) represented the destructive power of the sun’s heat. Maahes is depicted as both a lion-headed man and a lion devouring a captive

Sekhmet (also Sachmet, Sakhet or Sakhmet) was the fierce lioness-goddess protector of Upper Egypt. She began as the war goddess of Upper Egypt, her cult centre moving to the new capital, Memphis, during the 12th Dynasty. Sekhmet absorbed the pre-dynastic vulture goddess Nekhbet, protectress of Nekheb in Lower Egypt and was herself eventually absorbed into the more powerful goddess Mut.

Because Upper Egypt had conquered Lower Egypt, Sekhmet was considered more powerful than Bast, the lioness-headed protectress of Lower Egypt. Sekhmet became protectress of the Pharoah. Later she was considered the bringer of disease (apparently due to priests protecting her statues from vandalism by coating them with pathogens) and was therefore also prayed to by those wanting to cure disease. Thus she became the goddess of doctors and surgeons in the Middle Kingdom. Through her association with bloodlust, and with blood in general, sekhmet became associated with menstruation.

Ailuros was the Greek name for Bast. The Ancient Greeks viewed Bast as a version of their lunar goddess Artemis, sister of Apollo and daughter of Zeus and Leto.

A fierce lion-headed god worshipped in Nubia, and later incorporated into Ancietn Egyptian mythology in the form Maahes.

Not actually a god, the Sphinx is found in Ancient Egyptian, Ancient Greek and Assyrian mythologies. The lion was a powerful symbol in Ancient Egypt where there were several fierce lion-human composite deities. The Egyptian Sphinx may be found in the role of protector with the head of a Pharoah combined with the recumbent body of a lion; a combination of wisdom and strength called an androsphinx by the Greeks. Others are ram-headed sphinxes (criosphinxes). Whole avenues of Sphinxes of either type lined the routes to important temples, while the famous Great Sphinx of Giza guards the pyramids.

Narasimha or “man lion” was the 4th incarnation of Lord Vishnu according to Hindu tradition. In this incarnation, he had a human body with the head of a lion and was a god incarnate as a part-human, part-animal in order to kill the demon Hiranyakashipu, who cannot be killed by human, god or animal. As Narasimha is not any of these, but is all of these at once, he is able to kill the demon.

Snore deity Freya (also Frija) is the goddess of love and fertility (both animal and the land) and the wife of Odr or Ottar. She rode in a chariot pulled by 2 cats the size of lions. An early form of Freya was Frya, an earth goddess. Some cat fanciers like to identify Freya’s cats as Norwegian Forest Cats. Freya had a fondness for fairies and that breed is also known as the Fairy cat.

In Islam, the “M” marking stands for the prophet Mohammed (Muhammad) who had a great fondness for cats. While dogs are considered unclean by many Muslims, cats – who frequently bury their own waste and rarely eat another animal’s faeces – are not. Mohammed apparently loved cats and rather than disturb his sleeping cat, Muezza, he once cut off a sleeve of his robe which she was sleeping on when the call to prayer sounded. It is also said that the reason he loved cats was that one saved his life from a snake that had crawled into his sleeve. Legend says that Mohammed blessed cats with the ability to land on their feet. One of his writings tells that he had a vision of a woman punished in Hell for starving her cat to death.

In Christianity, the “M” marking on the forehead of tabby cats is said to be where Mary, the mother of Jesus Christ (Christianity’s primary prophet and son of the single Christian god) touched and blessed a tabby cat that comforted her baby.

Cats later got a much worse deal when they became associated with the devil. In the Middle Ages they, along with many other ordinary creatures, were considered the familiars of witches. Witches were mostly harmless old women who probably kept cats as company and to kill rats and mice around the home. When cats were tortured to death, their screams were said to be the screams of Lucifer himself. Devil worshippers variously revered cats (apparently kissing them under the tail i.e. on the anus) or using them as animal sacrifices. Black cats were especially associated with witches and continue to form part of witch-lore, especially at Halloween.

Always Share Your Joy And Pain With The Almighty!

Religion may be different, faith is ONE!
Read more
Lifestyle

In this modern world marred by incidents of terrorism, rape, money and murder, You and I are far away from the creator. He who gave food for all,...
Read more
Blogs

Selfless Love, A Lesson To Be Learnt From Them…

Many saints, writers and poets have mentioned selfless love in their works. These soulful words are for us not only to read but to imbibe....
Read more
Videos

Your Choice? Feeding The Hungry Or Donating At A Temple?

Now, all of us would relate with this incident thanks to the Bollywood movie OMG. But how many of us practice this still? Haven't we...
Read more
Musings

Life As We Know It: Reflections During Loner Walks!

Ah my friend, I said! You are a wonderful human. Let me assure you, you really are. Let this be a constant reminder to...
Read more

I love summer! A statement seen by most to be dripping with sarcasm. And immediately followed by the question: How can somebody love this...
Read more
Bollywood

Sweetest And Silliest Compliments To Make Your Man Go GAGA Over You!

In our busy lives, we sometimes forget to make our special person feel wanted and loved. Put your phone to some good use, by sending...
Read more
Blogs

A clean home is always a need but when it comes to cleanliness, a fresh and mood reforming scent is a must. But for...
Read more