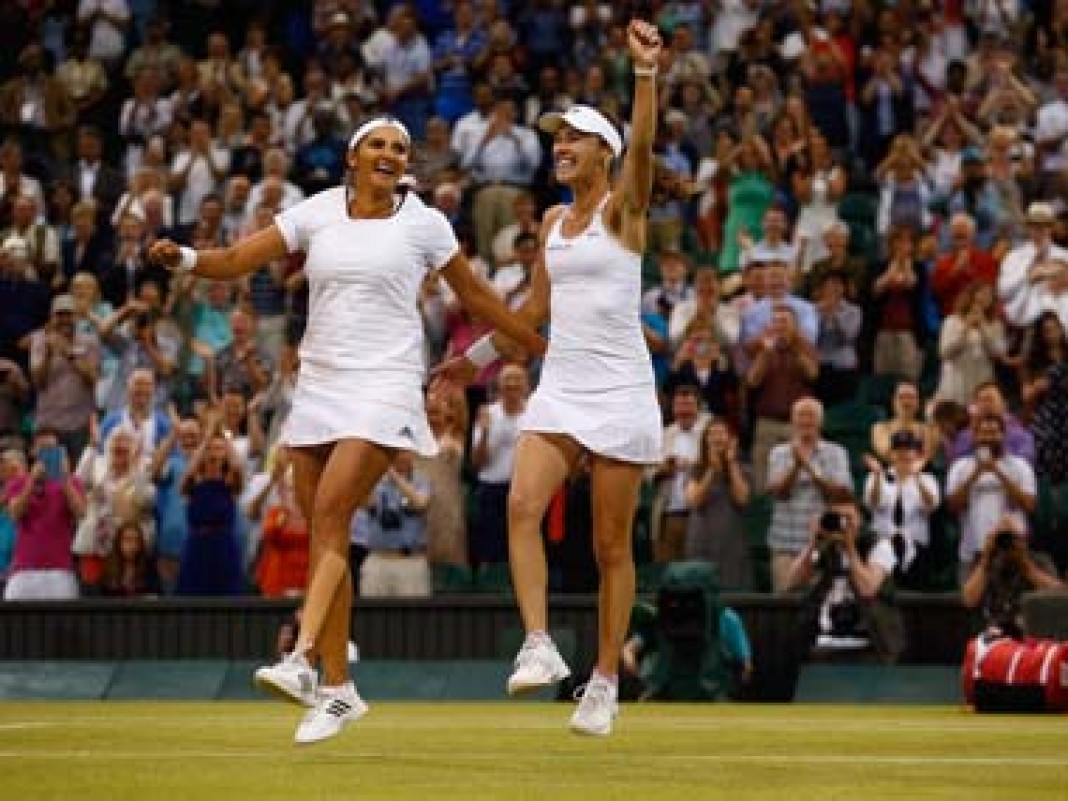 But we sure are shocked at the smart brains at BBC, who conveniently left out Sania in their tweet. Did Hingis win it alone???

If you missed out on Martina Hingis and Sania Mirza winning at Wimbledon, you really need to check your priorities in life, seriously.

The moment they won, the whole of India started congratulating her. And those who had ridiculed her all these years did not know where to hide. All of a sudden she became India’s favourite daughter.

Congratulations SaniaMirza and Martina Hingis for winning at Wimbledon. Sania you continue to make us proud!

We bow before Sania’s tennis skills. But we, at Mahindra, bow deeper to this gutsy woman’s determination to rise, despite the many disbelievers.

Epic ladies’ doubles final! So thrilled for @MirzaSania and @mhingis

BUT SOMEBODY AT BBC WAS SLEEPING???

This started the reverse reaction and people blasted them left right and center- #ShameOnYouBBC FYI BBC has not apologized till now, only quietly deleted the tweet. But that has only enraged the twitterati more.

@bbcindia only Hingis? Why did you not mention Sania’s name? It was doubles not singles.

@BBCWorld Shame on you BBC!! How can one person win DOUBLES ??Why no mention of Sania? #shameonyoubbc

@BBCIndia Martina Hingis is not a single person, but the double for BBC. #Media420 #ShameonyouBBC pic.twitter.com/NFYpzVQAEa — Raviteja Atikam (@Teja_1) July 12, 2015

@BBCIndia what about sania? this is in a very poor taste. Thanks for showing your true colors #ShameOnYouBBC

@BBCIndia so does Sania Mirza

And Finally They Realised Their Mistake After Criticism!

Justified or not?
Read more
Khurk

Hats off To Leander Paes! Going Stronger at 40!

Guess Who is the brand ambassador of Kerala Ayurveda?? Kerala’s Ayurveda, an ancient system of health care which is famous for its holistic effect on...
Read more
Khurk

Prime Minister Narendra Modi has, for the first time, commented on his government's decision to ban India's Daughter, the documentary on the fatal Delhi...
Read more

Khurki Suggests The Must-Do Things For You In Kerala!

We can still smell the sandal...
Read more
Blogs

Look At Them, These Celebrities Had Dyslexia!

All thanks to Taare Zameen Par, common people around the world have got major awareness about dyslexia in the past decade or so. Dyslexia...
Read more
Lifestyle

What Are The 10 Most Amazing Benefits Of Apple Cider Vinegar? #2 Is Too Good

Usher In The Motherhood With Loads Of Love And Confidence

For all those to-be moms and new moms who fear even taking babies in their lap or feeding them, motherhood is a beautiful feeling. A...
Read more
Blogs

The day came and the day went. How many of us used this opportunity to express our love for the nation, stand up and salute the...
Read more
Videos