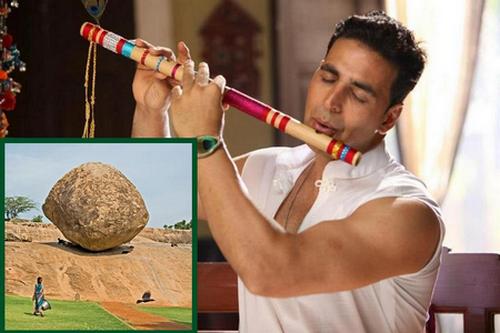 Our country is a land of mysteries and one such is Krishna’s butter ball. No this is not some world record of biggest butter ball but a historical marvel which never fails to amaze the people who witness it.

It is located in Mahabalipuram in Kancheepuram district of Tamil Nadu. The city is being mentioned in many historical texts and of course the history books. The city is known for its historical stone carvings. Also known at the world level because of the butter ball – a 20 meter high and 5 meter wide rock balanced on a hill slope. And the hill is so slippery that kids even enjoy sliding on it. Locals have named it butter ball as Lord Krishna was very fond of butter. In Tamil, it’s called ‘Vaanirai Kal’, which means the ‘Stone of the Sky God’.

The rock is believed to have been naturally formed, but theorists deny it. As per them, such a formation is not possible with natural soil erosion and other involved processes.

The Governor of Madras in 1908 Arthur Lawley considered it to be dangerous and thought of getting it down. Little did he realize that if something can stand for more than 1000 years, it cannot be forced to slide downhill. Nonetheless, he decided to deploy seven elephants to pull the rock down. But to everyone’s surprise the rock didn’t move an inch.

As per an architect, there are two reasons for the rock to be balanced the way it is.. Friction and Center Of Gravity.

Friction prevents the rock from sliding, conceptually similar to how we stand on a slope. Center of gravity allows it to balance on a small contact area.

But what actually balances it remains a mystery till date!

There’s even a documentary on Krishna’s Butter Ball…

All we can say is Haathi Ghoda Paalki, Jai Kanhaiya Laal Ki!!

Travel is the new black, everyone these days is so impressed with the idea of travelling that everyone loves it. Travelers round the globe...
Read more
Lifestyle

Every country has its own identity and is known by some Khurki filled reasons that sets them apart. And we Indians are different in...
Read more

You are what you wear, but sometimes you are what the clothing tag says. Before shopping, we all tend to look at the price...
Read more
Humour

This Girl Asks For Friendship On F-Day, But With A Twist!

Delhi is not just a city, it's another word for Indian culture and the best place people go for FOOD. The variety of food...
Read more
Himachal

You know what they say about travel. It's rebellion in its purest form. And this is the right time to be a rebel. May...
Read more
Bollywood

Born in Ambala in Haryana, this small town boy made a great mark in Hindi film industry. And he has also made industry proud...
Read more
Load more
KHURKI

Modi ji, Hope You Are Prepared For Brickbats Too!

Here’s A Compilation That Will Make You Go LOL!

Some are so easily relatable...
Read more