Brick-Throwing Delhi Police Cop Arrested. But Was He At Fault? 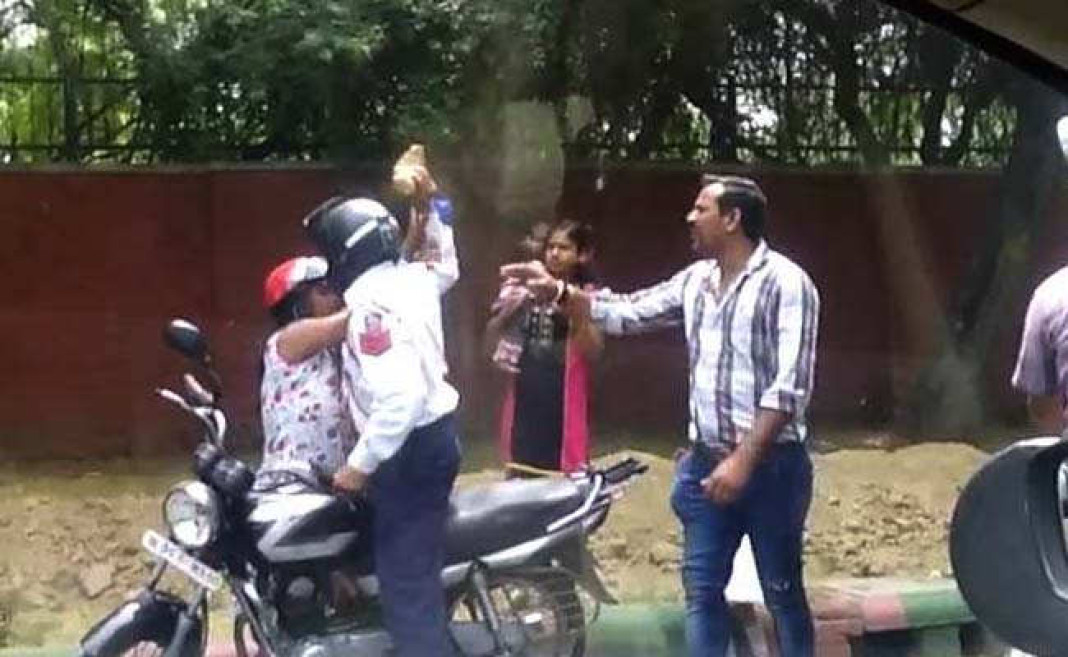 The visuals that we saw flashing on every TV yesterday afternoon were pretty shocking and depressing.

A Delhi Police Constable literally throwing a brick on a lady, is not something you see often. But if you see closely, it seems from the video that it was the lady who started this brick-throwing duel in the first place.

Watch closely you will realize that the lady had attacked his bike with the brick and not him. He, on the other hand, picked up a brick and threw it right at her, without thinking for a moment that she was accompanied with young kids, and could get hurt very seriously.

The irony of the matter is that the incident did not happen in some shady area of Old Delhi. Instead, in the upmarket Golf Links neighbourhood. After the lady refused to pay the bribe that he was asking for, a mere 200 rupees, he totally lost it.

Before we jump to gyaan on police sensitization and harassment of citizens by the police, the important thing to note here is that she was apparently violating a traffic rule.

The Head Constable has been arrested and will be taken to task. But how will that change the state of affairs in our country. So many such incidents go unreported because people just don’t care or some citizen journalist was not there to record it.

The law will take its course. There will be loud noise maybe till today evening. At Khurki, we are more worried about the impact this incident must have had on the kids who were accompanying the woman. Imagine seeing your mom getting attacked by a policeman.

Don’t we teach them in school that they are there to protect us!!! Think about it.

There CAN Be The Perfect Proposal This V-Day!

With less than a week to go, we believe many of you will propose your Valentine this year. But all the excitement might make you...
Read more
Blogs

We all think that toothpaste can only be used for making teeth white and making our gums strong. But that’s not true; the humble...
Read more
Blogs

Things That Men Do, Which Make Us Love Them Even More!!

Men can sometimes do those small things that will steal your heart for sure. Most couples is a serious relationship will totally agree to...
Read more
Blogs

And then Shakespeare said, what's in a name!
Read more
Blogs

From geography to technology to fashion to food stuff, things have changed so drastically over the last few decades.
Read more
News

Private buses on a rampage in Punjab and deaths continue to happen on state roads. At least 14 passengers were killed on Friday and 42 others seriously...
Read more