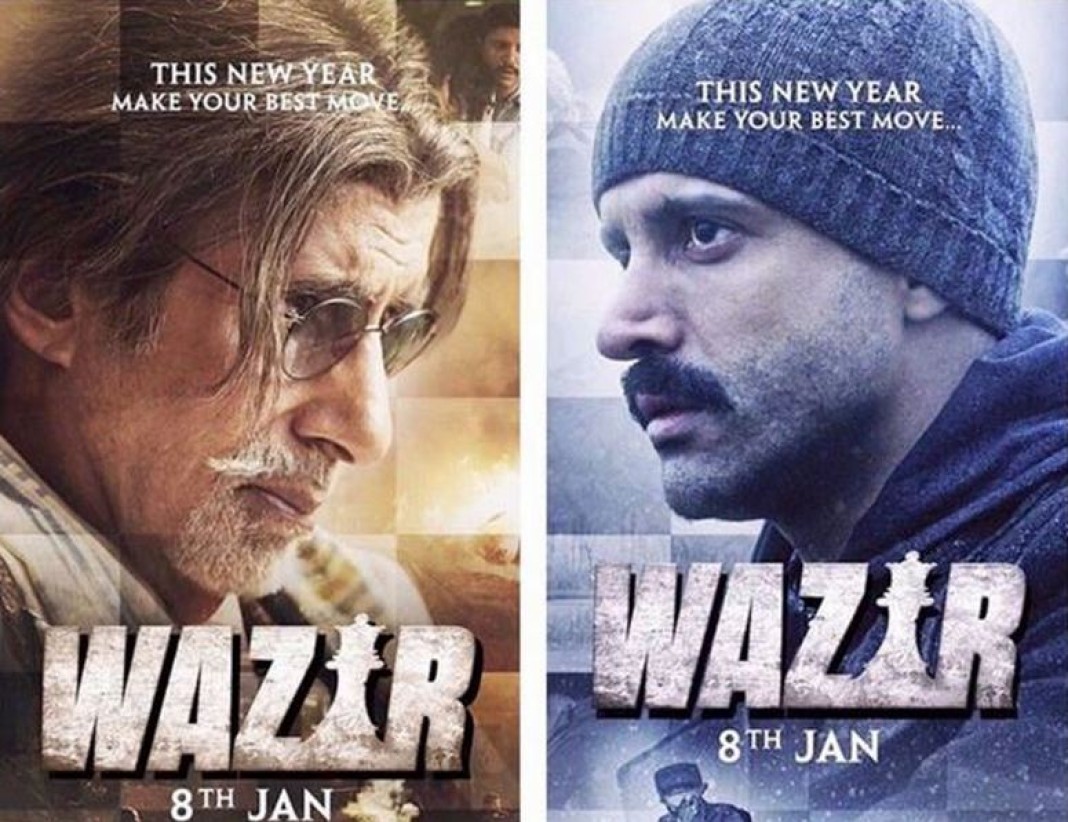 This will be the first time that Amitabh Bachchan and Farhan Akhtar would be seen sharing screen space together in Wazir.

Bejoy Nambiar’s upcoming film ‘Wazir’ released two teasers of the film earlier, showing Farhan in a serious mode. But it was Amitabh Bachchan’s towering presence that grabbed all the attention.

And here is the poster look of Amitabh Bachchan & Farhan Akhtar:

Have you checked out the #WazirNewPosters yet? Here they are once again for you all! pic.twitter.com/OtxdThLO4Z

I know many of you guys missed the Wazir teaser. Don’t worry, check it out here:

Movie is co-produced by Vidhu Vinod Chopra, Aquib Khan and Rajkumar Hirani. Wazir is written by Chopra along with Abhijat Joshi.

Vidhu Vinod Chopra recently hosted a special screening of Wazir for Javed Akhtar and the veteran writer-lyricist got so inspired by the movie that he wrote a poem on it.

Though his poem won’t be a part of the movie, on the request of the makers Akhtar will recite it at the trailer launch event.

Javed Akhtar and Vidhu Vinod Chopra share a great camaraderie and the former had penned down the lyrics for Chopra’s 1994 release ‘1942: A Love Story‘. Wazir is also special to Javed Akhtar as his son Farhan Akhtar will be seen sharing screen space with Amitabh Bachchan for the very first time.

Keeping our expectations high from Wazir. The movie will release on January 8.

Dare To Eat Me! Bet This Amazing Presentation Won’t Let You!

Have you fixed an appointment yet?
Read more
Bollywood

Another PRDP Parody That Is Just Hilarious!

So, Saif Is The New Chef!
Read more
Blogs

Have You Ever Chosen Holiday Options Based On Your Zodiac Sign?

Have you ever thought of planning a holiday trip based on your zodiac sign? No! Then do it now. KHURKI suggests that you plan where to head...
Read more
Load more
KHURKI

When life gives you a moment where you skip a beat, never ruin it for anything. Sometimes you end up waiting so long that...
Read more
Humour

Getting inked is a not an old, not modern but a popular trend. There's no doubt about it that modern world has taken to...
Read more