Our Beloved Cricketers And Their Babies! Adorable! 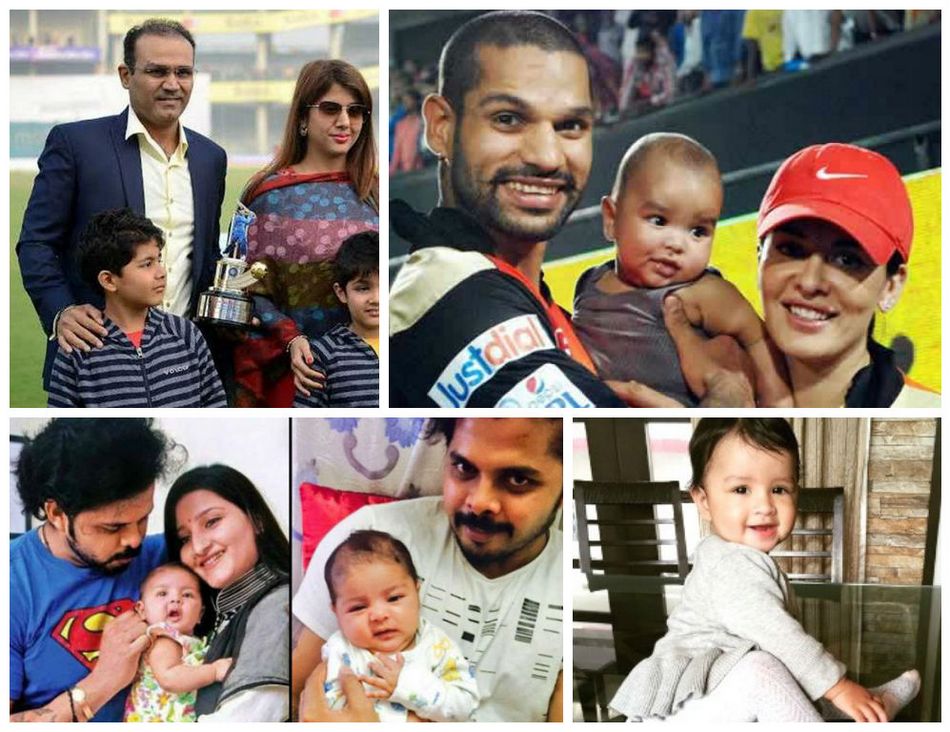 Be it cricketers, film stars or world leaders, when it comes to kids they all become the same. A bundle of mush and love! We bring to you a list of fathers who are also cricketers and adorable dads off-field. Have a look and get mushy!

We often see Viroo gushing about his sons in interviews. He is inspiring his sons to make him proud when they grow up. They have been promised a Ferrari if they grow up to successful adults.

Shikhar Dhawan can be the ideal role model for Indian men. He married Ayesha who is a divorcee with two girls, from her previous marriage. The couple handled the situation like responsible adults and are now living happily. Young Zoravar only made the family complete and is adored by his elder sisters.

Son of Yusuf Pathan and Afreen

Yusuf was blessed with a baby boy in 2014. He is a doting husband and father. He actually took a break from IPL to be with his wife at the time of delivery. And the chacha Irrfan has totally fallen love with this small bundle of joy.

Ziva is an adorable baby and is the apple of Dhoni’s eyes. When he is not on the field, you will find him spending quality time with his little doll. Check out her pictures on social sites.

The Wall is proud daddy to two young boys. They don’t just have his looks but also talent for cricket. We often see him spending time with his boys and grooming them to be the next stars of Indian cricket.

Children of Ashish Nehra and Rushma

While Ashish Nehra might not be seen on the field playing extensively for the Indian team, his kids are sure show stealers with their cute smiles and angelic faces. For Ashish, his family is his strength and motivating factor.

Controversy’s favourite child, S Sreesanth is a doting father in real life. He became the proud father of a baby girl in March 2015.

Childhood is always remembered as the most memorable time of ones life. The times of being free, care less, the days when you are...
Read more
Featured

Being a mother was never and will never be an easy Job, but being a father can be. Before you think we are gender...
Read more
Lifestyle

What if you wake up to find your kid standing on your head with a knife...Creeps! 18 Creepiest Things Kids Have Ever Said, Not Funny...
Read more
Lifestyle

In The Line Of Open Letters, Here’s One By A Youngster To His Parents!

Well if you are reading this, it's because of your parents. The parent-child bond is one of the most precious relationships and at the...
Read more
Bollywood

Khurki Found These Really Bizarre Fashion Trends For You!

Eew...how gory can that be!
Read more
Lifestyle

The general impression about Goa is that it is all about sea, sun and beaches. But not many know that Goa has so much...
Read more
Blogs

Some Of The Creepiest Things Children Could Say!

How To Look & Feel Sexy After Having A Baby!

After you have a baby, in all probability your sex life will hit rock bottom. However, most of your time will be occupied with...
Read more
Load more
KHURKI

Bollywood stars will stop endorsing brands, it seems. The "Dola Re" girls definitely would. Close on the heels of Aishwarya Rai Bachchan running into rough...
Read more
Blogs