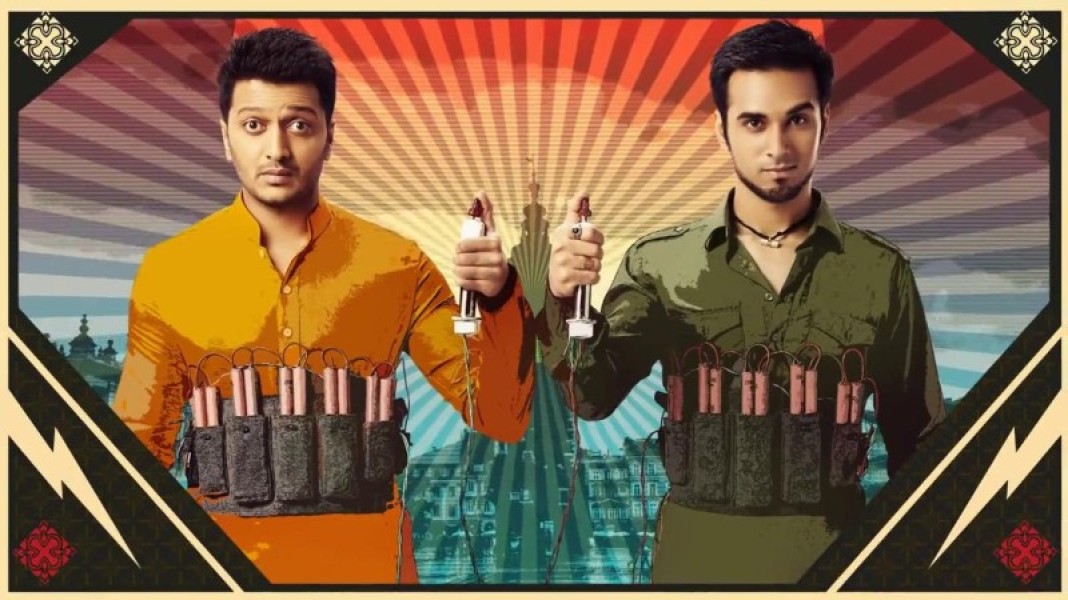 Bangistan, supposed to be a spoof on growing incidence of terrorism, has been terrorised itself!

The huge response that Baahubali and Bajrangi Bhaijaan are receiving at the box office, has terrorised Bangistan producer Ritesh Sidhwani into postponing the movie release by a week.

Starring Riteish Deshmukh and Pulkit Samrat, Bangistan was scheduled for a July 31 release. But now the release has been pushed back by a week to August 7.

This film is based on the lives of two blundering terrorists who are on a mission to change the world. Produced by Farhan Akhtar and Ritesh Sidhwani, Bangistan has music by Ram Sampath.

And while Bajrangi Bhaijaan is getting all praise from our friendly neighbour Pakistan, Bangistan has reportedly been banned.

Talking about the film, Sidhwani says he has created a fictional country called Bangistan, which has its own passport, national flag and its own position on the world map. We have created a different world – where people of all castes live. “But nowhere in the film it say it’s Pakistan”.

Sidhwani has written to the Pakistan High Commission to invite him to see the movie to prove that it’s not “anti-Pakistani”.

Reportedly Sidhwani, director Karan Anshuman and Riteish and Pulkit have applied for a visa to visit the country.

Smiling is infectious, you catch it like the flu. When one person smiles or laughs, it automatically brings a smile on another person's face. This...
Read more
Blogs

Kila Raipur, a small village in Ludhiana, comes alive around February every year as it plays host to a rare sports festival - in...
Read more
Humour

Guys always wonder why girls go to the washroom in packs and take so long to return. They find this really confusing! To be honest,...
Read more
Blogs

Do you struggle to make decisions or get them wrong often only to suffer the consequences? Whether you suffer or not, there is something about not...
Read more
Load more
KHURKI

Sunny Brown’s Punjabi Remix of This Song Is Superb

Playing on replay mode in my car!
Read more
Blogs

IIFA Awards 2015 held in Kuala Lumpur this year have set a new benchmark as far as presentation and absence of Bollywood stalwarts is...
Read more