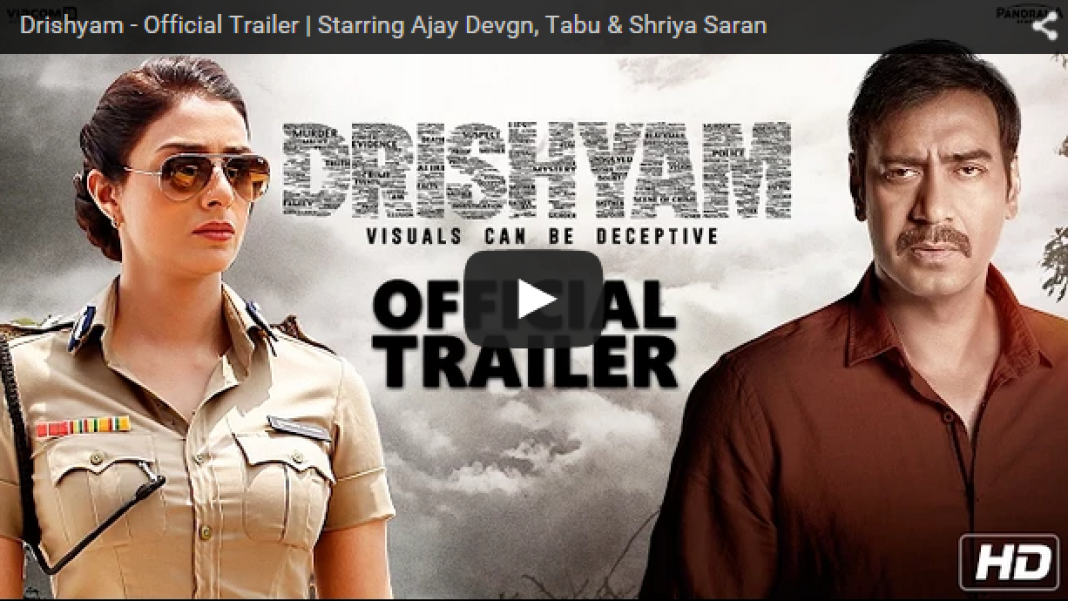 In the times of social media promotion, one expects without saying that a sudden boost is mandatory.

Look at the viewership that Salman Khan-starrer Bajrangi Bhaijaan’s teaser and trailer got! Record making feat.

But why is Ajay Devgn-starrer Drishyam is getting badly ignored? Only 40,000 hits so far?

Ajay Devgn is playing the role of a cable operator, which is an intense character to be played and Ajay is known for such roles. Cheeni Kum also stars Tabu as IG Meera Deshmukh along with Shreya Saran and Rajat Kapoor.

Film is set to release on July 31.

If you watch the trailer, it looks like the trailer of a Crime Patrol episode with all that mystery and suspense they show in their serial. What went wrong with superstar that he got ignored to this extent?

Watch the trailer here and find out:

Do let us know in the comment section if you will go for this film or not!

Share
Facebook
Twitter
Pinterest
WhatsApp
Previous articleNo Barriers Between Me And My Beloved Bed. Sleeping Naked Good For Health
Next articleNothing To Do On A Saturday? While Away Your Time Asking Siri These Funny Questions
- Advertisement -

The internet is not at all tired of praising Ranbir Kapoor's rather Sanjay Dutt's Sanju. The trailer has crossed 16 Million views in a day...
Read more
Blogs

Romance can be found in the most unexpected places. So don’t go searching on Google for it. There are some movies, which seem hardcore...
Read more
Blogs

You will be surprised by No. 1!
Read more

Priyanka's looking every bit a part of the series!!!
Read more
Humour

From Surgeons To Bhel Walas, Indians Are Best At Jugaad!

When it comes to "jugaad", we Indians nail it like anything. Those who don't understand the word 'jugaad', it is being innovative in a cheaper...
Read more
Lifestyle

Being a woman in a man's world is not easy. You love them or hate them but you cannot ignore them. They say men...
Read more
Lifestyle

What is worst than being alone on Diwali? And doing nothing about is even worst. There are chances you might end up as a loner...
Read more
Blogs

20 Fears That Hit You Around The First Day At College!

First day at college forms one of the most beautiful memories of our lives. What's going in the minds of thousands of students who begin this challenging part of their lives?
Read more
Load more
KHURKI

Is that all that's about a woman - sex? Are we ever going to rise above our sex-oriented thinking?
Read more
Bollywood

The king of Bollywood Shahrukh Khan celebrates 23 years of outstanding work in Bollywood. He's the one people look forward to, when it is...
Read more