Bhoranj Victory Shot In The Arm For BJP 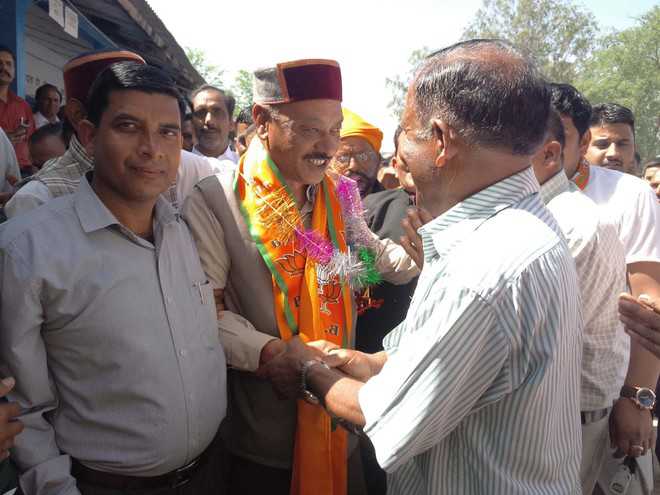 Impressive victory in the Bhoranj assembly by-poll has come as a shot in the arm for the BJP which is on a high, hoping to repeat the performance in the Assembly polls, due later this year.

The impressive win of Dr Anil Dhiman, BJP candidate and political successor of former minister and six -time MLA ID Dhiman, though along expected lines, will boost the morale of the BJP cadres. The win has given a high to the BJP which is hoping to do well in the Shimla Municipal Corporation elections due next month. The visit of the BJP National President Amit Shah here on May 3 is likely to mark the formal launch of the party’s election campaign for the Assembly polls due later this year.

The failure of the Congress to wrest the seat from the BJP despite being in power is an indication of the falling graph of the party in the state. With barely eight months left for the Assembly elections, BJP’s Bhoranj victory and that too by a very comfortable margin of 8,290 votes is a reflection of the party’s declining political fortunes.

On the other hand, the BJP campaign was very systematic and organized as senior leaders and MLAs covered the areas assigned to them. In fact, former Chief Minister PK Dhumal campaigned extensively as a sizeable portion of his earlier constituency of Bamsan was included in the Bhoranj constituency during the last delimitation exercise. Corruption was the highlight of BJP’s campaign with Virbhadra and the Congress candidate being the main targets.

The Congress, which made dynastic politics as its main poll plank with Dr Dhiman being son of ID Dhiman, failed to convince the voters. The fact that the BJP won with an impressive margin despite its rebel and sitting Zila Parishad member from Bhoranj Pawan Kumar polled 4,630 votes, indicates the party’s hold on the electorate. The ruling party could also not encash the anti-incumbency factor as ID Dhiman had won six consecutive elections since 1990.

Shimla, July 14: The rape-and-murder of the Class X student in Kotkhai area of Shimla district sparked state-wide outrage. Her body was recovered from...
Read more
Himachal

Shimla April, 29: After the opening of the 13,050-ft-high Rohtang Pass for all vehicles today, the 474 km-long Manali-Leh highway will open to traffic...
Read more
Himachal

At least 25 school children were injured on Friday when their school bus skidded off the mountain road in Mandi district in Himachal Pradesh,...
Read more
Himachal

Shimla, Aug 14: A massive landslide near Padhar in Mandi district should ring alarm bell for planners, engineers and geologists as the model of...
Read more
Load more
KHURKI

Next move is going to be changing name to Raj! Tum Hi Ho! Another proof that love knows no language came forth when a Canadian guy...
Read more
Blogs